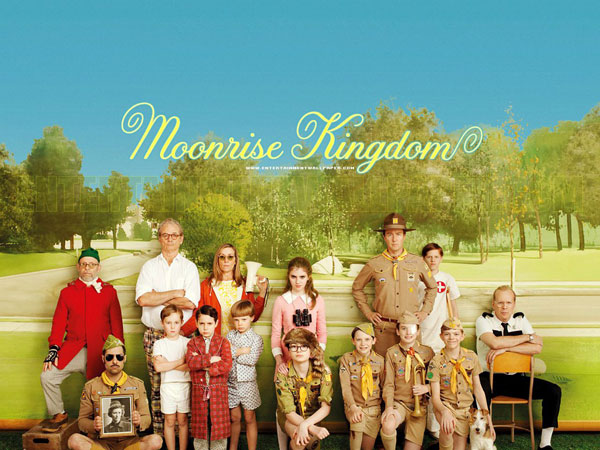 If I told you that Sam (Jared Gilman), a man in uniform, was in love with Suzy (Kara Haywood), a woman who lived in a lighthouse on the edge of a New England island, and they were going to run away together until a hurricane approached, you would say, “Don’t we have enough crappy Nicolas Sparks’ films?”  But if I told you that Sam’s uniform was the Khaki Scouts, Suzy was a troubled teen daughter of two eccentric attorneys, they were both 12, and after they ran away they’d be pursued by half a dozen scouts with knives, axes, sticks with nails, a motorcycle, a seaplane, Bruce Willis, Bill Murray, and Harvey Kietel, you might pull up a chair.  This is what happens in worlds created by Wes Anderson.  This is Moonrise Kingdom.

Scout Master Ward (Edward Norton) is not the most attentive leader and either doesn’t know or isn’t aware that all of his scouts, except Sam, hate Sam and wish to beat him up because he just doesn’t fit in.  Also having trouble fitting in is Suzy, whom Sam first meets when he wanders away from a church production of Noah’s Ark and stumbles upon Suzy in her raven costume and applying her make up in the dressing room with the other birds.  It only takes a short exchange and some challenging glances for them to know they’re soulmates, and it must be true because they don’t see each other again for a full year.  Only true love can do that. 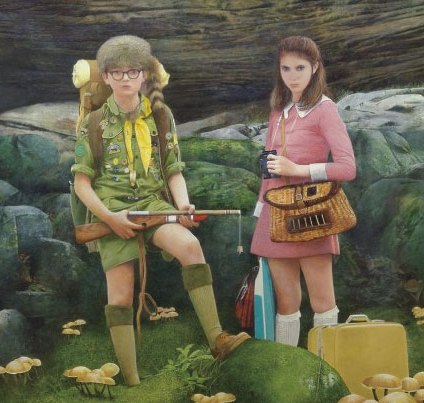 They write letters and make a plan.  Sam steals a canoe, and Suzy packs a suitcase.  Sam brings a tent, sleeping bags, and a mess kit.  Suzy brings a kitten, books, a record player, and lucky lefty scissors that will be needed.  Sam can catch fish and cook them on the fire he can build.  Suzy believes she has magic binoculars.  I can’t even begin to make it sound as absurd as it really is, and I haven’t gotten to all of the grown ups searching for these pre-teen fugitives.

In addition to the distracted scout master, the search party includes Capt. Sharp (Bruce Willis) of the Island Police, a lonely bachelor involved, semi-secretly, with Laura Bishop (Frances McDormand), Suzy’s mother.  Walt Bishop (Bill Murray), Suzy’s father, is in a world of his own as he struggles among searching for his kid, figuring out if his wife is having an affair, and drunkenly chopping down random trees as stress relief.  The searchers are rounded out by a sadistic group of scouts who, when not carefully tending to their camp chores, look forward to the beating they plan to deliver Sam.  I did mention that this is a comedy, right? 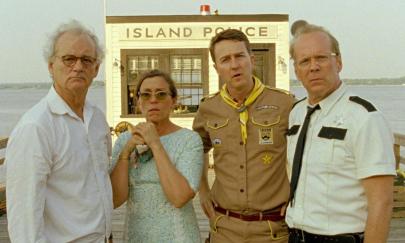 Wes Anderson (The Royal Tennenbaums, The Darjeeling Limited, Rushmore) clearly has learned Woody Allen’s two rules of comedy.  Rule 1:  react normally to absurd situations.  Rule 2:  react absurdly to normal situations.  Not only is the whole film pretty much “theater of the absurd,” but part of its beauty is that is it presented like theater of the bad.  There’s a narrator (Bob Balaban) who seems to appear through a time warp, simultaneously dryly telling about the future while existing in the moment.  Dialogue is delivered like a stale pizza, as if the actors had just glanced at it and are reciting it to the best of their limited memories – but it works and is part of the charm.  Anderson’s camerawork is fabulous, tracking shots around the Bishop home as if each room was built and stacked on the set of the old TV show Hollywood Squares.  Even outdoor shots are fun, often with characters centered in the frame while everything else seems to move around them.  The colors feel overexposed, as if the whole film was shot through Instagram, which helps to give the “feel” of being set in 1965.

Sam and Suzy are 12, but they’re not children.  They’re more in control of their lives than any of the adults, and I think that’s part of what Anderson is going for.  Many children are smarter than their parents, and often better behaved.  Lots of kids know more than we give them credit for, and these two are no exception.  They have such an awareness that it wouldn’t be a surprise if they moved to the suburbs, got jobs and a house, and lived happily ever after.  Age doesn’t matter in Moonrise Kingdom, only desire.  They desire to escape those who don’t understand or appreciate them.  They desire to help and protect each other because it seems the only people interested in their happiness is each other.  Winning “Movie of the Year” from the American Film Institute and an Oscar nomination for Best Original Screenplay probably brought along some happiness too, I suppose.  The only thing I was not happy about was a short but awkward scene in which Sam and Suzy are dancing in their underwear.  While it might be normal for 12-year olds to experiment with touching each other, it somehow seemed kind of wrong for us to watch it.  It was a scene I could have done without and contributed nothing.  I guess even the best summer fantasies can’t be perfect. Note of interest, this role was the result of Cara Hayward’s first ever audition, and she is a member of Mensa.

Teacher gives it an A for both a grade and Absurd.