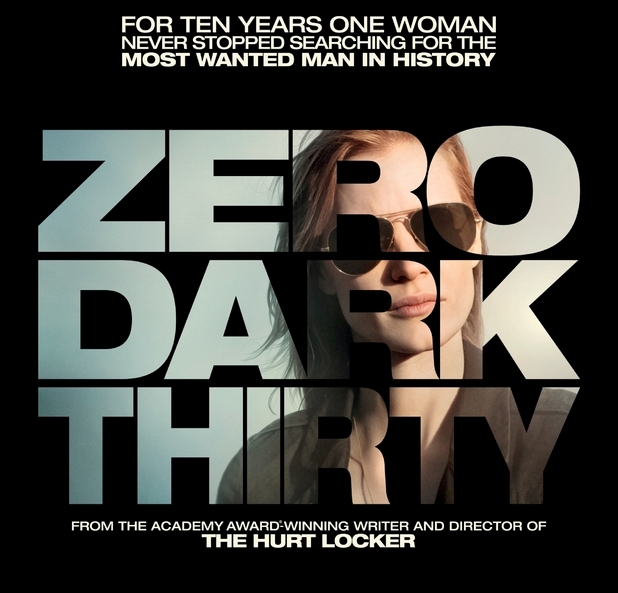 Zero Dark Thirty opens with actual audio of people trapped in the World Trade Center after the planes struck on September 11, 2001.  Then we see words that have caused some controversy:  Based on first-hand accounts of actual events.  To some people, this is a proclamation that Zero Dark Thirty is virtually a documentary or what some might call a “docu-drama.”  However, the words “based on a true story” are also attached to The Amityville Horror, The Exorcist, and The Texas Chainsaw Massacre, so it is rather difficult to know where to draw that line and with just how light a pencil that line should be drawn.  “Based on” all that, I must approach Zero Dark Thirty as entertainment instead of history and stay completely away from any issues regarding accuracy.  Also, because we all know where and how the film ends, there is really no need to worry about spoilers.  For those interested and to the best I could learn, the title refers to an unspecified time between midnight and 6 in the morning and is also used to refer to the time about when Osama Bin Laden was killed.

When the hunt for Osama bin Laden has stalled, the CIA sends Maya (Jessica Chastain), a new face to help in the search.  Although that “face” and the rest of her skin appear to have seen very little sun or experience, she is referred to as “a killer” by Dan (Jason Clarke), a well-seasoned interrogation specialist, and other agents who know her.  Initially, she is not comfortable witnessing the “enhanced interrogation” tactics used by either the US military or those to whom we have outsourced, but she settles into her position as the hunt progresses, albeit slowly.  In her first daily briefing, she assertively contradicts Jess (Jennifer Ehle), a more experienced member of the team, and quickly establishes that she is not interested in protocol or seniority.  Maya’s only interest is Osama bin Laden.

Joseph Bradley (Kyle Chandler) is the team leader on paper, but from Maya’s perspective he is more of a hindrance than help.  He cares less about Bin Laden and more about stopping the next terrorist attack.  He even drives her to basically tell him to either let her do her job as she needs to or send her back to Washington.  As the timeline shows the years adding up, we also see the stress adding up on the team, which slowly dwindles in personnel.  I won’t mention specifically who leaves the team, how, or why, but eventually Maya seems to be in charge.  Whether by her actions, more time and intelligence, or both, the hunt – her hunt – starts to take shape.  They know that it is virtually impossible to stumble upon Bin Laden somewhere throughout the Mideast, so they work from the bottom up.  They find grunts.  Grunts lead to bigger grunts.  The team knows that someone has to get information to Bid Laden.  If they can find the couriers, they can follow them to Bin Laden.  The methods of interrogation are questionable, but sometimes the results are solid.  Not always – sometimes.  The consequences of the “not” are not clear, but that’s a debate for another day.

Throughout Zero Dark Thirty I was a bit underwhelmed, falling victim to what I call the “Rainman Effect,” thusly named for my experience seeing Rainman the first time.  That’s when there is so much anticipation from publicity and reviews that set the bar at an unreachable height, thus leaving one with a feeling of “is that all you got?”  It wasn’t until I put together three key moments that I realized what this film was all about, and that’s when I felt better.  Well, a little better.  Oscar-winner Kathryn Bigelow (The Hurt Locker) is telling a less of the story about the capture of Bin Laden and more about one person’s unhealthy but quite necessary obsession with her perception of justice.

Chastain (The Help, Mama) plays Maya like someone on whom you cannot turn your back, no matter whose side you’re on or whose uniform you’re wearing.  Her wide eyes and red hair portray a false innocence, at least in the context we think.  She might know how to determine if a suspect is lying based on a simple physical gesture, but she doesn’t think globally enough to realize what a target her appearance makes if she walks the streets of Pakistan or anywhere in the war-torn Mideast.  Opposite her innocence is how she reacts to Bradley when he pushes her too far.

I mentioned three key moments, and this is key moment #1.  There is a protest outside the US embassy that specifically includes a giant banner on which is written Bradley’s name.  This means two things:  First, he has been identified by the enemy.  Second, he must leave because not only he but his whole family might be specifically targeted.  (For comparison, you might remember the Valerie Plame situation.)  Maya tells Bradley that ISI (Inter-Services Intelligence) must have outed him.  As Bradley slowly and disappointedly walks away, Maya gives him a long stare.  She “outed” him because he was a roadblock to her progress.  Wrong, unprofessional, and dangerous – as far as I know.  Go up to the top of this post and look again at one of the many posters made for this movie.  That wasn’t the most popular poster, but it was probably the most accurate.

The hunt eventually takes shape with strong evidence suggesting Bin Laden’s location.  It’s time to “sell it” to Washington.  A plan is needed as more intelligence is gathered.  I have no clue if we really have the satellite imaging and other methods used to figure out how many people, both male and female, are living where they suspect Bin Laden is, but it’s damn impressive.  When all that is brought to the CIA director (James Gandolfini), he just wants to know percentages so that if things go wrong, he can pass the buck to those who advised him.  Most at the table admit to a 60% chance Bin Laden is there, but Maya says 100%.  I was never a fan of The Sopranos, but Gandolfini was likely the most impressive presence in the film.  His scenes were minimal, he downplayed his character, but he brought maximum impact.

This leads to key moment #2.  The director joins Maya for lunch, curious about her 100% claim, and here I must paraphrase.  He asks, “Do you remember when we recruited you?”  She says, “Right out of high school.”  He asks, “Do you remember why?”  She says, “I’m not at liberty to talk about it.”  This can’t be good.  We don’t know specifics, but we know she’s got issues.  She was likely one of those students who couldn’t get along with others, extremely bright but lacking social skills, teachers loved her and students hated her.  She was probably reclusive, kept her face in books out of dances.  She might have even been bullied and pushed so far to have made threats against other students.  We don’t know for sure what happened, but we do know that something happened.

We know that eventually the information reaches the President, who was likely left out of the film for political reasons or Bigelow would likely have been accused of Democratic propaganda.  We know that eventually a plan is created and successfully executed.  How accurately it was recreated, we can’t know for sure regardless of how many firsthand accounts are given.  The main reason I won’t discuss that part of the film is because of how it felt to watch it.  I love the tension I feel in the few seconds before someone hits the GO button on a rollercoaster.  From the moment Seal Team 6 first suits up until they land back at base, that tension was engaged.  My shoulders, chest, arms, everything were contracted, and nothing relaxed until it was over.  I cannot think of another film except maybe Silence of the Lambs that caused such a physical reaction.  Whether that’s a statement about me or the film, I’m not sure, but it still existed.

The final scene, the final shot before fade to black, is key moment #3.  Maya boards what looks like a C-130, a cargo plane that can carry about 22 tons, including over 9,000 gallons of fuel.  Yet on this trip, it will carry only Maya.  The pilot asks, “Where do you want to go?”  Maya says nothing.  She cries.  This shows us what Maya is all about.  She has nothing.  She has nobody.  She has nowhere to go, nobody to call and say, “Hey, we did it!”  She is an isolated, obsessive woman – and that’s what kind of person it takes for such an operation.  How many of us can imagine giving up ten years of our lives to chase one man?  How many of us could leave our homes, our comfort, everyone we know, face death on a daily basis while the whole world waits for us to finally do our job?  To find one person?

Of course those of you in the military have lived most or all of list except perhaps the last item.  It is similar to what I have said about police officers.  Almost every officer I have ever met is divorced, which causes me to say that the set of skills it must take to be a good police officer are not the same set of skills it takes to be a good husband or wife.  I will never know or understand the mentality of those in the military or law enforcement, and that’s a good thing.  If those in the military and law enforcement were anything like me, nobody would be protected because I’m a wimp with a keyboard.  But I’m a wimp who is lucky to live in a country with enough people who are completely opposite me, and I’ll never be thankful enough.

Back to the film, which I can’t rate as highly as most of the reviews I’ve seen nor would I nominate it for best picture.  Zero Dark Thirty is not so much about Osama Bin Laden as it is about Maya.  It’s about what kind of person it takes to get a very specific job done.  It’s about someone who is willing to sell out others and push someone under the bus in order to get aboard and eventually drive that bus.  If we look carefully enough, we can see that Maya is not a good person, but she does a good job.  I can’t entirely admire Maya, but she’s a great example of certain exceptionally bright kids who get in trouble in school.  Teachers always say the same thing about those kids:  “If they would only use their brains to do something good.”  That’s Maya, and that’s Zero Dark Thirty.  Teacher gives it a B+.