One of the toughest films to make is a dark comedy because it’s hard to flip between laughing and watching someone die, but if you need a good example, Bernie, directed by Richard Linklater and starring Jack Black, is the place to start.  It’s a sleeper that sneaks up on you in a good way, and it is a true story.  Not the “inspired by true events” or “based on a random person” or “somebody said this happened.”  I mean “true story” as look it up.  It’s a true story.

When the Hawthorne Funeral Home of Carthage, Texas, needed a new assistant director, nobody stood out quite like Bernie Tiede (Black).  Bernie arrived with all the proper credentials, both on paper and with genuine handshakes, doing taxes for the locals, and going to craft fairs.  He not only sang with the church choir but directed and starred in local musical theater.  (Just his scene in The Music Man is worth the rental.)  What more could you want in a funeral director?  You can answer that yourself later.

One of those treated by Mr. Tiede was Mr. Rod Nugent, a wealthy banker, entrepreneur, and deceased husband of Marjorie Nugent (Shirley MacLaine).  Mr. Nugent, a shrewd businessman who would shoot his own foot if there was a profit to be made, was liked by very few people, but even fewer liked Marjorie.  Regardless, Bernie visited her often, bringing gifts like bath soaps and other fruit-scented crap.  Marjorie never failed to both take his gifts and shut the door in his face, but never say never.

Slowly, the ever-positive Bernie melted the ice princess and showed the people of Carthage that she really was human beneath that icy façade.  They started with just dinner and a show and progressed to traveling the world together.  Bernie eventually was in control of most of her finances and investments, much to the chagrin of her broker.  However, winter eventually returned, along with Marjorie’s frosty coating.  Eventually, and spoiler this is not, Bernie shoots her.  It’s not a spoiler but the basis of the story, which is not so much about the killing as the aftermath.

The film is more about the trail in both the courts of law (the “dark”) and public opinion (the “comedy”).  It’s about what the people of Carthage, those who liked or despised Marjorie, had to say as to whether Bernie was guilty of murder or just doing what anyone else would have done if they had been given the chance.  Nobody gave Marjorie a chance, nobody except Bernie.  She allowed him to get close, perhaps too close, and she went from Marjorie the bitch to Marjorie the nice, and then the bitch came back.  Nothing illustrates this better than the simple fact that Marjorie was dead – or missing – for nine months before anyone really noticed.  Not until the police were pushed by her family, who were more concerned about her will than her well being, was her body eventually found.  Bernie was that good at fooling people, but she was that disliked that most everyone was fine without her.

Linklater does not attempt to say if she did or did not deserve to die.  He only poses the question rhetorically because answers are both impossible and ironic.  Texas executes more people on average than the rest of the world (yes, world) combined.  However, this past year a Texas man admitted to shooting and killing a woman but was found “not guilty” of murder because she was a prostitute and took his money without “performing” as promised.  According to Texas law, he had the right to use deadly force to get his money back.  Based on that, it wouldn’t be a stretch to think that Bernie might have had the right to shoot Marjorie, and that’s where the people of Carthage come in. The film is interspersed with quotes from townspeople, some appalled but most expressing how and why they believed Bernie should be acquitted of murder.

Linklater did not have to make this film.  Other than a handful of film festivals, including this year’s Ebertfest, it showed more in Iceland than in the US, and that’s a shame because it the best of any Linklater film I’ve seen, including his Before trilogy.  As I said, he didn’t have to make this film.  Nobody was demanding it, and nobody outside of Texas likely has ever heard of Tiede.  Then why make it?  Because of the insane number of people who, while fully aware of the facts, believed that Bernie was fully justified to have killed Marjorie because she treated him somewhere between a child and a servant instead of a partner. 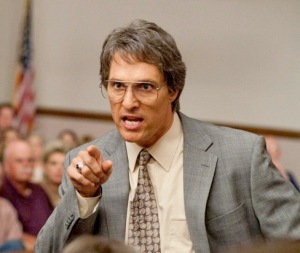 Let’s conclude with the usuals – the actors.  Black is fabulous.  Roger Ebert was correct when he tweeted that in a more fair world, Black would have been nominated for best actor.  I have not seen many of his films because he seemed like barely more than a clown to me.  Of all films, I actually gained appreciation for him in Kung Fu Panda.  With Bernie, he’s on a whole new level.  MacLaine shows that the best acting goes unnoticed, as she casually morphs Marjorie from the ice queen to the girl in love and back to the ice queen again.  McConaughey is fun as Danny Buck, a headline-grabbing prosecutor who usually manages to get as much attention as his trials.  One thing I have to spoil is about some of the supporting cast.  Not all of the townspeople interviewed are actual residents.  Some were area actors picked from a casting call, but most of their lines were actually taken from interviews with the real townspeople.  They didn’t all want to appear on camera.  Those who did appear on camera, genuine or not, are far and away the highlight of the film.

Naturally, I’m not going to spoil the verdict.  Sure, you can easily look it up yourself, but that would take some of the fun out of the movie.  When Linklater appeared at Ebertfest in April, I asked him, “If the verdict had been different, would you still have made the film?”  He said that they had started production before the verdict came in, made some adjustments, and held some things back along the way.  However, without telling the verdict, I will just say that he completely expected it to be the opposite.