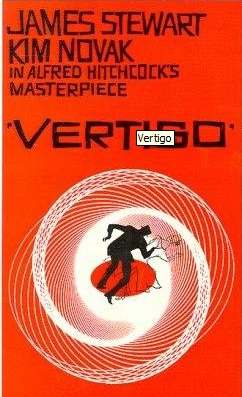 Item 74 in a 50-part series of classic movies that I never saw, should have seen, but didn’t because of various reasons that weren’t my fault:

Please keep in mind that this is partly a discussion for people who have seen the movie and a review for those who have not.  There are spoilers.  If you don’t want spoilers, then stop reading when you get to the video trailer for the movie.

Anyone who has seen Vertigo would agree that not much can be said because too much could be given away with just one piece of information.  On the positive side, that allows me to type a lot less.

I won’t rate the movie because my opinion is as arbitrary as yours.  Some movies should be seen, no if’s, and’s, or but’s.  This is one.  I had reasons to really criticize the film, plot holes that I thought were overlooked by everyone else.  More thought, however, convinced  me otherwise.

John “Scottie” Ferguson (Jimmy Stewart) was a successful police investigator until the night he and another officer chased a suspect across a string of San Francisco rooftops.  Then came the roof on which John slipped and was hanging from the gutter.  Another officer tried to help but fell to his death while Johnnie watched, which may have caused a fear of heights that produces a dizziness called “vertigo.”  Later I’ll explain why I say “may have caused.”  The result was an unexplained back injury (maybe from the stretching done in the picture below) and months in the care of Midge (Barbara Bel Geddes) his wise-cracking, ex-fiance – who clearly never got over the “ex” part, even though she’s the one who called it off – from college days gone by.  Interesting how much older he looks compared to her and how similar her role is to that of Grace Kelly in Rear Window.

John decides to retire from the force because, according to his discussion with a superior, you can’t possibly be an effective cop if you have a fear of heights,.  Yet somehow he managed to successfully be a cop for over two dozen years while possibly having a fear of heights all that time.  In the film he says he’s had it his whole life but didn’t know it.  I say, perhaps he did not have it his whole life because, considering how he fainted while standing on a chair and looking out a window, I’d have to imagine that in all his years as either a cop or civilian, he had to have been exposed to at least that much height before and thus would have suffered vertigo before.  I say he didn’t have the fear of heights until the moment the other cop fell to his death.  If he really had a fear of heights, would he have even attempted to chase a fugitive across some rather high rooftops?  In the words of Cosmo Kramer, “Not bloody likely.”

Shortly after retiring, he’s contacted by Gavin Elster (Tom Helmore) an old friend who hires Johnny to follow his wife Madeleine Elster (Kim Novak).  Gavin admits that there’s no reason to think his wife is cheating, but her behavior (random drives, staring at things, 94 miles on her car when she says she didn’t go anywhere, and hours missing) seems strange.  Also seems strange that Gavin is counting the miles on her car, but that’s a later paragraph.

It’s amazing how closely John follows Madeleine and her platinum blonde hair without being noticed.  One time he follows her car down an alley where she parks and enters the rear door of a rather shabby, run-down building.  He parks about 30 feet behind her, and there’s a truck about 10 feet in front of her.  She’s got nowhere to go should she decide to leave, but this doesn’t seem to concern John.  The building she enters in a suspicious way is just a flower store.  So why couldn’t she just go in the front door like everyone else?  I guess to build up some false drama.

It’s also amazing how easily they seem to fall in love once they meet.  It doesn’t say much for the bond between old college friends, but it is explained later.  Madeleine does indeed behave strangely, so much that she occasionally puts herself in precarious situations (reminded me a little of Bella from Twilight) and forces John to save her several times – except one, and the last one, when she runs to the top of a Spanish mission.  John’s vertigo kicks in, and that’s where the trouble begins – as well as spoilers.

As he stands near a window along the stairs rising up the mission tower, he sees the body of Madeleine going down.  Splat.

Now that he’s responsible for two deaths, he spends time in a psychiatric rehabilitation center until he manages to get over the loss of his love and his friend’s wife.  Several times he sees women who, at first glance, seem to be the striking blonde, until one of those times the resemblance is so amazing that he can’t help but get all creepy (and I know creepy) and follow her up to her apartment.  It’s amazing how this woman, Judy Barton (also played by Kim Novak), opens the door to see John standing there, she shows not one bit of a reaction other than that some creep followed her to her apartment.  Here’s why I say that:

Ya see, Judy was an actress hired by Gavin to fool John into believing that she was the real Madeleine.  John never really saw the real Madeleine, except when she – the real one – fell from the Spanish mission to her death.  Well, not really to her death because she was already dead when Gavin tossed her from the top of the tower.  It was a brilliant way to dispose of his wife, provided of course he knew that John would look down while running up the mission steps so that his vertigo kicked in, and provided he wouldn’t see Gavin waiting up there with a dead wife to toss from yon dizzy heights.  Come to think of it, there are other things that were brilliant.  Sure was brilliant of Gavin to hire an actress who just happened to have an apartment right in the middle of all the places that John and “Mrs. Gavin” used to spend time together.  And it sure was brilliant of Gavin to be so sure this actress would keep her mouth shut.  I haven’t known many actresses, but the ones I’ve known were all rather good at the opposite.

John was a rather sympathetic character when the story began, what with accidentally causing the death of a fellow officer, losing his career, gaining vertigo, causing the apparent death of Madeleine, causing the apparent death of the woman he loved – also Madeleine – sort of, facing a rather rude and accusatory hearing of his responsibility in the death of the beloved Madeleine, and probably more.  However, once he started forcing Judy to dress like and color and shape her hair like the apparent Madeleine, I kinda lost my sympathy.  When he forced her to climb the mission tower from which Madeleine, or someone, died, I’m still not sure if he was trying to cure himself of a phobia or trying to torment Judy.  Other reviews I’ve read say that he was just trying to overcome his fear of heights, but he was acting with such anger that it’s hard for me to believe he was just trying to cure himself.  It’s possible he was trying to kill Judy because she made him fall in love with Madeleine, who wasn’t Madeleine.  She then “killed” the Madeleine he had fallen in love with.  And then, when he thought he had his Madeleine back, it wasn’t really Madeleine but a plot to use him in a murder.

Regardless of those picky flaws, it was a fabulous plot to get rid of a wife.  Maybe “fabulous” is too positive of a word.  “Efficient”?  I’ve said for many years that if you want to kill someone and get away with it, take them to the Grand Canyon and get them drunk.  A slight push is all it will take.  Or, hire Alfred Hitchcock.