Please don’t waste my time with random online dictionaries or blog posts by idiots like me, unless it actually is a post by me.  If it’s by anyone who disagrees with me, it’s wrong.

Here’s another argument I don’t accept:  You can’t use the same word all the time.  You need variety.

You would be right, except – no.  Variety is not always better, especially in the examples listed below.  That’s all there is to it.  Now let’s do some learnin’.

What’s the difference here?  The difference is that female is an adjective and woman/women is a noun.  Would you write this headline using “man” instead of “male”?  If so, you’re an idiot.  Far too often I see headlines using “woman” or “women” as if they are completely interchangeable with “female.”  The words are obviously related, but they’re not synonyms.  Sorry. 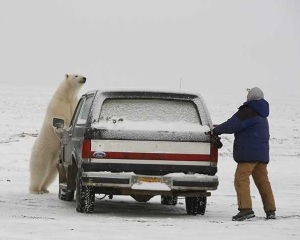 “That’s when I knew I was going to die.”

No.  No you didn’t.  You didn’t know because you didn’t die.  Too often I read books in which something devastating seems about to happen and the narrator or character says, “I knew I was going to die.”  If you’re writing in past tense, and if you didn’t die, then you didn’t “know” you were going to die.  Plain and simple.

However, you can write any of the following:

I believed I was going to die.

I was sure I was going to die.

I was convinced I was going to die.

I read a Jodi Piccoult novel (not good) in which the narrator wrote that a mother “knew she would never see him again.”  The mother was thinking about her son who was facing life in prison for murder.  Turns out the kid was not guilty, and turns out she did see him again.  So, also turns out that Ms. Piccoult, or her narrator, goofed.  That’s not acceptable.

A Historic v. An Historic

I was watching Erin Burnett on CNN one night when she referred to something as being “an historic occasion.”  I’ve also heard Bush 43 say this, and I’m sure hundreds of others.  They’re all wrong.  I’ll explain.

First, let’s understand the difference between a vowel and a consonant.

Consonant:  a speech sound (such as /p/, /d/, or /s/) that is made by partly or completely stopping the flow of air breathed out from the mouth

Vowel:   a speech sound made with your mouth open and your tongue in the middle of your mouth not touching your teeth, lips, etc.

To say “an historic” means to treat /h/ as if it were a vowel.  Do me a favor, pronounce the word “historic.”  Now, tell me if your tongue is “in the middle of your mouth not touching your teeth, lips, etc.”  I think you’ll find that your tongue actually spreads wide and touches your back, upper teeth.  Therefore, is the /h/ in “historic” a vowel or a consonant?  Right!  It’s a consonant.  To continue, do we precede initial consonant sounds with “a” or “an”?  Right again!

You can argue that using “a” or “an” before an “h” should be taken on a case-by-case basis, but you can’t argue that “an historic” is correct.

I often get Tweets from writers who have written blog posts about writing.  Most of them begin with something like “Five Common Misused Phrases” which is a disguised way of saying “Five Reasons I’m a Better Writer Than You.”

I recently but briefly battled with a writer who started his list with “Firstly.”  Right there, I stopped.  I scanned and saw “Secondly” and “Thirdly” and then I was done, except for the comment that he didn’t like to such a degree he called me an a$$hole.  There are plenty of reasons to call me that, but my challenge of your writing is not one of them.

Perhaps “Firstly” was created with a semi-good intention.  Someone noticed that when you list something as being “First,” it’s actually an adverb.  Adverbs tell you how, when, where, and to what degree something happened.  “First,” tells you when – first, second, third, etc.  Unfortunately, many adverbs also end with “ly.”  It’s likely that’s the reason the creator of “firstly” added the –ly.  This is only a theory at this point, but it makes sense.  “Firstly” goes back to Great Britain in the 1500’s.  Though it may have been used in an acceptable way back then, it wouldn’t be the first (not “firstly”) word that history has or should have deleted.

Please remember something very important – I don’t care about what websites you might use that tell you “firstly” is acceptable.  I only care which is better or more strongly correct.  I only care about which will never be argued or contested.  Nobody will ever tell you that using “first” might be wrong, but many people will tell you that “firstly” is wrong.  How is it better to choose something that can be argued against instead of something that is 100% correct?

Have a nice day.