If you haven’t read the book Life of Pi by Yann Martel, you need to be aware of a few things before seeing the movie.  Although the previews make it seem like an adventure movie about a teenage boy stranded in a lifeboat with a Bengal tiger, there’s a great deal more to it than that.   However, I can’t possibly tell you very much because it’s one of those movies that contains the most significant spoiler I’ve ever seen or read.  In fact, even telling you there’s a significant spoiler might do a little damage all on its own, so forgive me if I’m too cryptic.  Anyone who reviews this film “correctly” will probably have written their shortest review ever because there’s just too much to not give away.  Understand?  Didn’t think so.

Picine – pronounced like “PissIng” – Patel is an excellent student with an unfortunate name taken from one of the most beautiful swimming pools in France.  He is such a subject of ridicule that he changes his name to just Pi, like the math symbol for 3.14.  It didn’t hurt that he’s also a brilliant math student.  His father runs a public-supported zoo in India, but attendance and other budgetary issues have forced the zoo to close.  Although the family doesn’t own the zoo, they do own the animals and are free to sell them.  They book passage on a Japanese freighter to Canada where a buyer has been secured, and the money will allow the Patel family to start anew in the Great White North.

The drama that causes teenage Pi (Shuraj Sharma) to end up in a lifeboat with not just a tiger but also an orangutan, hyena, and zebra is too great to spoil, not just in terms of the plot but also the visuals.  There is no doubt that Life of Pi, directed by Ang Lee (Crouching Tiger, Hidden Dragon) will win an Oscar for cinematography.  The colors alone are brilliant, even without the ironic beauty of filming a sinking ship.  We’re talking about a hundred people sealed in a death trap beneath the sea, yet my thoughts were how the use of light and color were breathtaking.  Go figure.

What comes next is 227 days at sea while battling a tiger, the sun, a storm, the sea, sharks, hunger, dehydration, and one’s own mental anguish.  What comes before is about a half hour of interspersed interview and flashback moments as a writer pays a visit to Pi on the advice of a relative who claimed that Pi had the most amazing story to tell, a story that will “make you believe in God.”  This of course lets us know that Pi survives the 227 days, but that doesn’t mean he survived in one piece.  During his interview with the writer, the adult Pi (Irrfan Khan) reveals some very funny and clever touches and subtleties needed for certain moments of the 227 days to make sense, such as why the tiger’s name is Richard Parker instead of some kind of jungle cat name.  There is a great psychological price paid by Pi, but few would argue that there is no price too great when it comes to living and dying.  That price is what the spoiler is all about and why it needs to be protected.  It’s one of those stories that on the surface is a fabulous story.  However, once – well – once something “extra” is revealed, it turns the story in a very different direction, but a direction that is no less great. 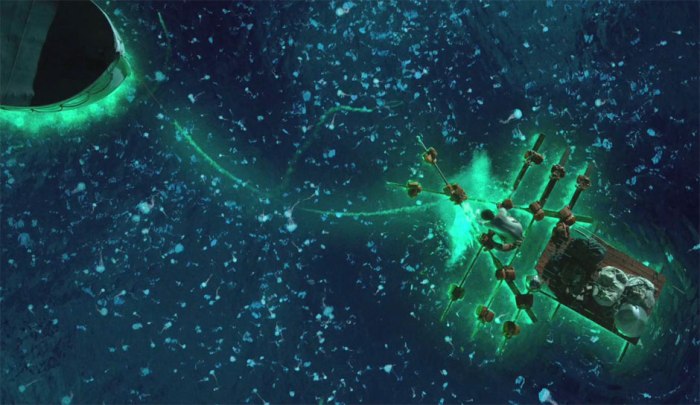 I did not see the 3D version, but there are several scenes that made me wish I had.  There’s an evening scene with Pi’s boat adrift.  He’s suddenly surrounded by some amazingly iridescent creatures, including a great whale.  It’s easy to see that CGI was used for the tiger on the lifeboat because it’s just not possible to get a tiger to behave such a way on the ocean, but the involuntary squirming and twitching you’ll do will allow you to quickly forget about whether or not the tiger is real.  Normally, I would steer anyone away from seeing a film in 3D because you’re basically wearing sunglasses, which automatically darkens the film and dims the color and light.  However, I suspect that the squirming and twitching will be even greater seeing Life of Pi in 3D, which just might make up for the negatives.

Most people who both read a book and see the film version will do it in that order:  book then film.  For this story I would recommend that same sequence.  However, if you have not already read the book, and if you aren’t going to be able to do so before the film is gone from wide release, then please get to the theater now.  This is one of those films that will definitely lose a little something should you have no choice but to see it at home instead of a theater.

A final note about that first half hour.  The woman next to me in the theater had not read the book, and I wasn’t surprised that her eyes were getting heavy about 15 minutes in because the film definitely got off to a slow start.  However, once the boat ran into the storm, she eyes were just as glued to the screen as mine were.  It’s a film that critics might love more than audiences, but don’t let anyone talk you out of seeing it.  Go see it for yourself so you can genuinely take part in the conversations leading up to Oscar night in this coming February.