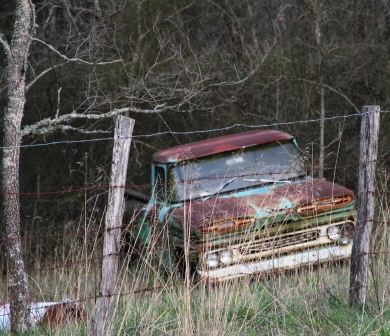 Write what you know, write what you love.  We’ve all heard this before, and we usually practice it.  Usually.  Doesn’t matter what it is or when, as long as you enjoy your time at the keyboard.  Right?  Usually.

Back in April or May of 2012, I was visiting a friend’s blog and saw a picture of a rusted pick-up truck.  It was stuck, abandoned in the woods and following the picture was a story about how the truck had gotten there.  I told the author how much I enjoyed his story, and he semi-laughed because I didn’t know it was not a true story.  He explained something called Friday Fictioneers, a writing group that shared a picture prompt every week for which a gathering of writers would create a story, poem, or anything they were inspired to create from the picture.  Something I had never heard of before – Flash Fiction.  Flash Fiction?

Through teaching Language Arts for over 20 years, a picture prompt was something I had assigned to students hundreds of times, but I had never actually written something like that myself.  I looked up the blog and found a most fun group of people.  Just as I was told, there was a picture to be found every Wednesday.  By Friday morning, the Friday Fictioneers had posted a few dozen links to their blogs on which were their take on what the picture had inspired.  Writers from various states, countries, even continents were posting, sharing, reading, and commenting on each others’ work.  It was brilliant fun.  Here’s the link to my first go at “flash fiction.” 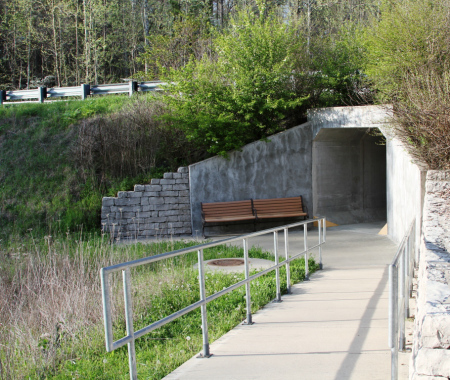 Until that time, I had always thought of “flash fiction” as a cop out for someone who was too lazy to write a longer story.  Boy was I wrong.  It was not a cop out.  It was a challenge.

I’m not sure what the best part of the Friday Fictioneers was.  Maybe it was the pleasant camaraderie.  Certainly it was the positive comments and feedback I received and also gave to others.  Maybe the fabulous mix of styles, such as poetry, fiction, humor, horror, children’s stories, things that seemed like children’s stories, and, of course, even zombies.  Regardless of what you wrote, the “suggestion” was to write only 100 words.  Most people did, some didn’t, but it was not vital either way.  I chose to strictly stay at 100.

Along with the mix of writing styles was a mix of approaches.  Some writers would read your story and find positive things to praise in your comments.  Some writers would visit your page and give you something more than just “great job.”  Some would make suggestions for improvement and even point out grammar or punctuation mistakes.  I did that.  Some would also suggest changes, ways to make your story better, or at least ways to edit out less important words and phrases in order to give you extra room for more descriptive vocabulary.  It was not unusual for me to leave a suggestion, thus beginning an exchange of five or ten comments, back and forth about further variations.

This writing group, writing exercise had several valuable rewards.  The obvious one was blog traffic.  More important was making new friends.  Even more important was writing instruction and improvement.  I can’t speak for others, but I learned a great deal about editing and revising.  It was both work and fun to begin with maybe 117 words and then do some critical thinking to trim it down to only 100.

I learned much about writing dialogue, how to have your characters say only what was purely necessary while also writing the way people might actually speak.  This is the problem for most people who are not good with dialogue.  They write what seems like more proper English but not necessarily “real” language, the way we speak to each other, which isn’t always in complete sentences.  But that’s not the most important part.

The important part is two-fold.  First, as I said, I loved it.  I, like many others, couldn’t wait until Wednesday morning to find that week’s picture prompt.  There were snowy mountains, rusted fences, crumbling barns, and mischievous cats.  I would see each picture and allow the wheels to turn, sometimes left, sometimes right, then back again, until just the right story hit me.  The praise I would often get was nothing I had ever gotten anywhere else.

The idea was to spread the love.  Don’t just soak up your own attention.  Get out there and read what others were writing.  Tell them what you loved but don’t hesitate to point out what you didn’t love.  It seemed, at least to me, perfectly okay to make suggestions of what others might consider changing.  I would usually find something to compliment and follow it with, “You might consider changing ____ to ____ because ____…”  Just today I pointed out a misplaced period.  Nothing that would stop a bus, just a minor thing, and the author was very happy that I had caught the error.  However, not everyone reacted that way.

After eleven months of regular participation, I stopped.  I had visited someone’s blog to leave a comment, but the writer was not happy about it.  One writer, no way for me to know or remember who, except that I know it was a woman, replied with something like, “Well, if that’s what you think, then you have no imagination.”

I don’t know exactly why, but it had a strange effect on me.  The following Wednesday, when the next picture was posted, I had nothing.  I looked at the picture up, down, forwards, backwards.  I flipped it again and again in my head, but I had nothing.  It was as if that woman had knocked me off my bicycle, and I just could not get back on it.

I kept falling back to the woman’s words, that I had no imagination.  I wanted to say, “Excuse me, but have you not read my work here for the past year?  Have you not seen how well my work is received?”  But who am I?  I’m nobody special.  Who was I to tell people how to write better?  What had I accomplished that gave me any right to tell someone what to do?

After thinking further, I realized I had accomplished something.  I don’t think there are many people lurking around these blogs who can say that they’ve spent as many years as I have working specifically, on a daily basis, with words and language.  I did accomplish something, several somethings, and I had four slices of paper with signatures and seals of approval to show for it.  I had a diploma and certificates to prove that I knew my stuff.  How dare this woman tell me I have “no imagination”?

Pieces of paper?  Do they really prove anything?  Do they make one person better than another?  Well, better – yeah – but only better at whatever the task is for which those papers are required.  If I’m stuck on the highway with a flat tire, those pieces of paper aren’t going to do me or anyone any good.  If my toilet is leaking, those papers aren’t going to stop it.

Still, each week after that, I tried to write.  I looked at those pictures and tried several times to come up with another story about someone on the brink of something terrible, as most of my stories did.  Nothing.  Each time – look at the picture – nothing.  What the hell happened?  Was it really just that woman who knocked me down a peg?  It was the only conclusion I could find, but I wasn’t going to admit it. 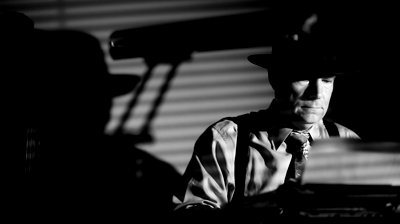 Instead, I wrote a blog post about how I was going to be a more “serious” writer.  No more wasting words and writing time on these picture prompts.  Yeah, I mean, that was for 5th graders, right?  Sure it was.  Maybe.  But even if it was, I couldn’t do it anymore.  I didn’t choose not to do it.  I just lost it.  No more stories about kids nearly torn apart by guard dogs.  No more long-lost children returning home to find the father they had abandoned.  No more teenage lovers secretly meeting in an abandoned house as a silent stalker arrives.  No more conversations between God and Jesus on Christmas Eve.  No more ghosts who didn’t know they were ghosts.  Nothing.  I had nothing.

What’s the point of all this?  I guess it’s to let a fine group of people know that I did not climb my way up to a higher ground to where I imagined myself above such “amateur” writing.  No way, not at all.  Quite the opposite.  I didn’t rise anywhere, but instead I was knocked down somewhere.  Whatever it was that had been driving me, week after week, was gone.  I’m sure a huge part of what I loved was the praise from others.  In fact, I was very surprised, but happily surprised, on occasions when a few people would tell me, “This isn’t your best.  I expect more from you.”

Imagine that.  I had written well enough, and often enough, that other writers could rightfully say, “I expect more from you.”  While that might seem like a put down, it is actually tremendous praise, but it was praise I can no longer live up to, and that’s sad.  I’m not crying that someone hurt me.  I’m not looking for pity.  I’m saying that the creative spirit for this kind of writing was knocked out of me.

Occasionally, I find posts from some of the bloggers I know through Facebook, and I visit their stories, leaving the same comments I had before.  But I limit my visits to the few people who I know are okay with my comments.  I also limit my visits to only the few I happen to see on Facebook.  I don’t seek out the stories, but I will visit if it comes across my desk.  Desktop.

So – to all Friday Fictioneers – I thank you very much for helping me improve my writing.  I hope I have helped some of you as much as you have helped me.  I would like to get back on that bicycle again, and I only wish it was that easy.  Writers are sensitive, which is why we write, to express how something has affected us.  Good writers want to get better, and we don’t get better from “Great job.”  We get  better from, “You might consider changing ____ to ____ because ____…”  So when someone leaves feedback that isn’t exactly “Great job” but is intended to help, please be careful how you respond to it.  It might leave a mark.