“A story goes like this:  Have a character.  Put him up a tree.  Throw rocks at him as he tries to get down.  Eventually, he needs a ladder to get down.  But if that ladder doesn’t make sense, your story sucks.”  – a college screenwriting teacher I had back about ’85.

It’s the future.  Close to 2100, to be exact.  Sam Bell works for a company that harvests Helium-3, an abundant Moon mineral, because it’s a cheap, easy fuel supply that solves our planet’s energy woes.  All Sam has to do is drive big-ass trucks to machines built by Lunar Industries that scoop up the rocks, pack them into rockets, and send them back to Earth.  We avoid global warming, people save money, everyone wins, except Sam, who is handsomely paid for signing over three years of his life to play with astronomical Tonka trucks.  Three years is significant because it has been determined, by past practice, that someone can only take about that long away from human contact before one starts to fall apart and mentally/emotionally collapse. 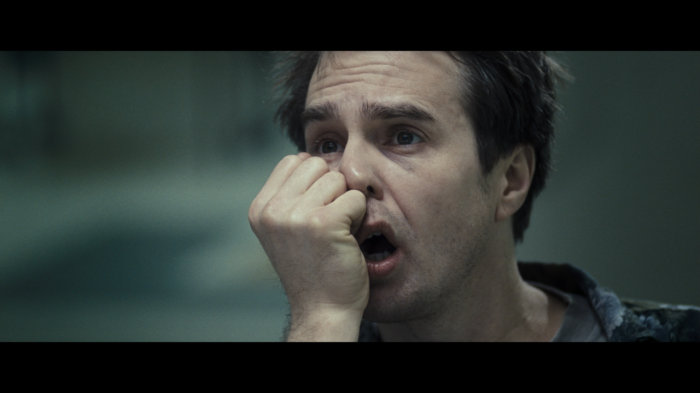 His only “real” companion is a computer system called GERTY, voiced by Kevin Spacey but behaving way too similar to HAL3000.  GERTY seems to know everything about the station, which is should.  Occasionally Sam video chats with his wife, learns how things are just peachy back home, and then just look forward to that return trip home.  To keep himself close to sane, Sam slowly builds a model of his home town, complete with houses, streets, and various details to keep his brain sharp and his hopes up for when he will see that home again.  For Sam, that homecoming is just around the corner.  That’s when things go wrong.

Security measures are breached.  Breeched.  Messed up.  Doors are open that should not be open.  Communication with Earth is not as reliable as previously.  He is startled by what appears to be a woman in the station and burns his hand on hot water.  When GERTY asks (but knows fully well) what happened to his hand, Sam lies and claims to have cut himself.  GERTY is suspicious because, while its video sensors know the truth, it can’t see into Sam’s mind.  Probably can’t.

While mining, or “harvesting” more Helium-3, Sam again sees the woman and this time crashes his truck, damages some vital equipment, and injures his head.  GERTY informs Sam that Lunar Industries is sending a team up to fix the damage but also to bring him home.  When Sam overhears a communication between GERTY and Lunar, and the conversation abruptly ends when Sam enters, he gets rather suspicious.  Both pride and fear cause him to attempting fixing the harvester himself, but that only leads to more trouble and a startling discovery.  Instead of seeing a woman – he now sees a separate version of himself.

To go any further means spoilers, but since I’m not going to recommend this film, I’m going to cough up the spoilers because I was greatly disappointed with the rest of the film.  Here’s a picture – and the spoiler will follow:

As previously stated, anyone can start a story, but not anyone can end one logically.  Here’s a link to a post I wrote that was Freshly Pressed last year and addresses this exact topic.  It’s called A Contract with the Reader.

Sam is hallucinating, or so it seems.  GERTY is concerned, or so it seems.  Sam explores the station and finds more than he was aware existed.  One of the things he eventually finds is a room that contains hundreds of clones of Sam.  Turns out that the three-year contract is really about all the performance time that any one clone has within its system.  After about three years, when a “Sam” starts breaking down, they roll out a new one and the cycle starts all over again.  Same is not hallucinating when he sees himself.  He just sees a new version of himself slowly taking over while he is breaking down. 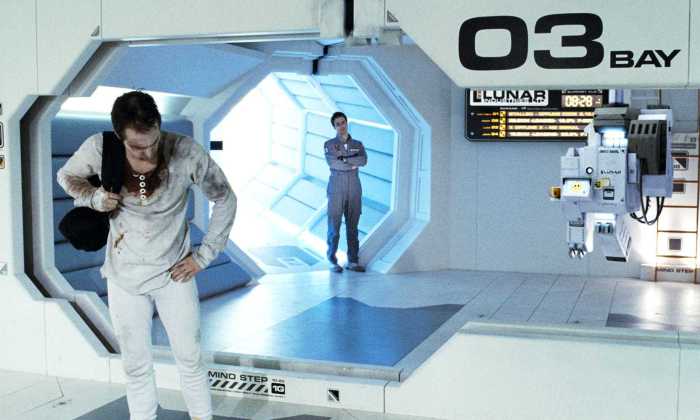 My problem with this is logistics.  If each Sam is going to eventually see himself like this, he’s not going to react well.  Just as this Sam damaged the harvester, any other Sam could do even greater damage to the station as well as the other “Sams” in waiting.  So if Lunar Industries is so technologically advanced as to have these clones, to program them with memories of a hometown, a wife, and a kid to video chat with, then they could just as easily program these clones to just be nothing more than a mindless robot that simply does its job and knows it will eventually be disposed of.  Lunar does not have to run the risk of what could go wrong.  Just make a better Sam.

The story eventually runs into a third Sam, each having a slightly independent personality but mainly the same person.  Then it becomes a game of who can get rid of the other Sam and who can survive when the Lunar Industries team arrives to take the worn-out Sam back and get the mining station back in order.

While the performance of Sam Rockwell (Seven Psychopaths, The Way, Way Back) is fabulous, playing three different versions of himself and allowing us to see them separately.  I suppose equal, if not more kudos to director Duncan Jones (Source Code).  Sometimes we forget that a great performance is often the work of a great director and not necessarily a great actor.  See Robin Williams in Moscow on the Hudson, written and directed by Paul Mazursky, for proof of that.

The ending with the clones seems like a great twist, and for a story – it is a great twist.  However, the lack of logic is what ruined it.  When that character is up a tree, and some wonderful rocks were being thrown at him, a really good ladder seemed to appear.  But it’s a flawed ladder.  It’s a wooden ladder in a time when there should be aluminum or carbon-fiber ladders instead because a wooden ladder in this time period is all wrong.  Well, not “wrong,” but in the wrong place.  I think you know what I mean.  If not, well, that’s the best I can do.  Above-average performances but a below-average ending.

Teacher gives it a C.