Here’s where things heat up.  Talking to the police is never fun.  Just sayin’.  I didn’t go to jail, but I couldn’t pass up a chance to use this picture. 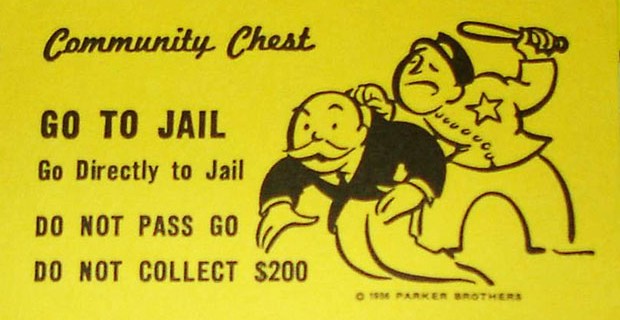 Chapter 9:  My First Run-in with the Police

Ann and I hadn’t talked much from January to early February, and I assumed it was because of their plan to quietly split.  I was wrong.  I found this out one day in class with a room full of students when the teachers’ union president entered my room and said one of the scariest sentences you might ever want to hear:  “Don’t get nervous, but two police detectives are here to talk to you.”  Can you imagine hearing such a thing?  I hope not.  “No matter what they say, you don’t answer anything.  All you say is that you can’t talk to anyone without an attorney.  I don’t care what they ask – you don’t answer anything.”

I was still stuck on the word “detectives.”  When I asked why they wanted to talk to me, the union president said, “You don’t know?”  No, I didn’t.  “Well, you better get down there.  Principal’s office.”  I walked in, had a seat, and saw my principal – whom I liked and liked me too – and two unfamiliar, grim faces.  I can’t remember their exact questions, but I’ll paint you a picture:

“Sir, are you familiar with (a 5th grade student we will call) Mary?”

“Yes.  I mean, I can’t answer any questions without an attorney.”

“Are you having a relationship with Mary?”

“Are you fu-  I mean, I can’t answer anything without an attorney.”

“You’ve been accused of having an inappropriate and criminal relationship with Mary.  Is there anything you’d like to say about that?”

“Officer, I really, really wish I could answer that, but I can’t without an attorney.”

“So you don’t deny that you’re having a relationship with an 11-year old girl?”

“That’s not what I said.  Yes, I deny that, but I can’t answer your questions without an attorney.”

“You just answered that one.”

“That wasn’t a question.  I was correcting something you said that was wrong.”

The principal interrupted.  “Officers, this is a very unfair situation, and I would like you to leave.  He’s obviously not going to answer anything without an attorney, so do what you have to do but do it somewhere else.”  And they left, and the principal apologized.  He then told me that he had no choice but to send me home for the rest of the day and that I was not to come back to school until an investigation was complete.  I was suspended with pay.  I was being accused of having a sexual relationship with a child.

“Do you have any idea what’s going on?” I asked the principal.

He hesitated.  “Over the weekend, Ann and her husband went to the police and told them you’re having a relationship with Mary.”

“Has anyone talked to Mary and asked what she has to say?”

I went back to my classroom, got my stuff, and left.  The kids had already been sent to lunch, so I didn’t have to face them.  That would have been difficult.  I left the building and was home for only about two hours when the phone rang.  It was one of the detectives.

“Sorry to bother you, Sir.  I thought you’d want to know that we finished interviewing the student and her mother, and we’re convinced that you did not have an inappropriate relationship with her.  Sorry to bother you.”

It was probably the most frightening two hours of my life, but I should probably have been happy it was only two hours.  My mind had no choice but to calculate all of the dominoes that would fall from just being publicly accused of doing something with a female student.  I had no choice but to imagine how my kids would react, my family and friends, and my co-workers.  And also my own students with whom I had worked all year.  Then I got a call from the union president.

“I heard it’s all over.  They know you didn’t do anything.”

“Ann and her husband told Mary that they wanted her to accuse you of doing something with her.  Touching her, anything.  She wouldn’t do it, and they told her that if she didn’t, then they were going to tell the police that Mary had told them that story but that now she was afraid to admit it.  They told her to just admit it to the police and she’d be okay and her mother wouldn’t even have to know.”

“I know all about you and Ann.  You know her husband hates you.  It’s his plan to get you fired,” she said.  “I’m sorry to say this, but it worked.  You’ll be fired.  You can come back to the building and get all your stuff when the kids are not around, and you’ll get paid through the end of the year.”

That hurt.  Hurt a lot.  I had not done anything wrong, but an accusation against me was enough to dismiss me, and there was nothing I could do about it.  The next board of education meeting was filled with parents demanding to know what happened to me.  The kids were pissed that I was gone.  The parents were pissed that nobody was talking to them.  Understandably, the parents heard rumors about me and the student.  Because I was gone for good, the parent assumed the worst, which makes sense, but the board of education needed to explain to people who, although I was gone about 6 months early, I had not done anything wrong.  Parents asked why I was gone the rest of the year if I hadn’t done anything wrong.  Logical question, to which the board could only say, “He didn’t do anything, but we had to let him go.”  Also at that meeting, they took a vote, and Ann was fired too.  I was told that I could likely sue her for sexual harassment because she had made the accusation following the ending of a relationship, but I decided I didn’t want to get involved in things like that.  Looking back, maybe I should have.

Secondary to the accusation against me was finding out why Ann would go from wanting to leave her husband for me to wanting to accuse me of such a horrible thing.  What I later learned was that he told her that if she didn’t go along with his plan, she would never see her son again.  She said, “Are you threatening to take my son away from me?”  He said, “No.  Worse.”  She took that as a death threat, which makes sense.  What doesn’t make sense is that she believed it and wanted to stay with someone who would make such a threat.  However, a death threat is nothing to take lightly.

“Why are you stalking me?” he asked.

I was served with a subpoena that said I had threatened Ann’s husband with a golf club.  He claimed that he attempted to talk to me peacefully and that I picked up a golf club, held it in a menacing and threatening way, and that he had to flee in fear.  I suppose when one hits golf balls with a golf club, one might hold the club in a menacing way, but you would only feel threatened if you were the ball.  Ann and her husband wanted to serve me with a restraining order, forcing me to stay away from them or risk being fined and/or suffering jail time.  I find it hilarious that they were asking for an order of protection from me, like the one that my wife had deceptively obtained against me.  I had to either show up in court and explain my side of the story, or the order against me would be granted.  I did not want to pay for an attorney to defend myself against such garbage.

On paper, I’m one bad-ass dude.  I spent the rest of the summer collecting unemployment compensation, playing golf, and interviewing for a new job.  On one of those summer days I wanted to see the Mississippi River.  I bought a new car, drove two days there, met a woman in a bar who allowed me to sleep at her place, then I drove back.  What happened when I got back will be explained in the next chapter.

About a year ago I went to Mexico for a week.  On the way back I had to go through customs.  After stamping my passport, the officer said, “Sir, please come with me.”  I was brought to a small room with a few benches where people of various races sat, all looking equally confused and wondering who might be a terrorist.  I watched an officer searching through several suitcases.  After about ten minutes, someone called my name and waved me over to a desk.

“Where are you coming from?” a man with a badge asked.

“Do you know where your ex-wife is right now?”

“Just have to make sure you’re not travelling with her.  That’s all.  “Is it true that you have an order of protection against you?”