We sometimes have experiences as children that we don’t realize are not experiences that all children have.  Sometimes, we think either every child, or maybe no other child, will go through the same positive and/or negative events.  Some of my most treasured childhood memories were gathering with family, aunts, uncles, and cousins, at a summer beach house.  I imagine that for 14-year old Duncan (Liam James), his summer beach house experience in The Way Way Back would fall under a negative experience.

An actual “way way back” is the far back and rear-facing seat of an extra long station wagon.  It’s a seat in which few kids ever wanted to sit and was often used by parents as a “time out” or a place of punishment while the rest of the family was almost in a different zip code.  Just as the people in such a car might be far apart, so are certain segments of the film which, while worth watching for sure, is a little confused about its own identity. 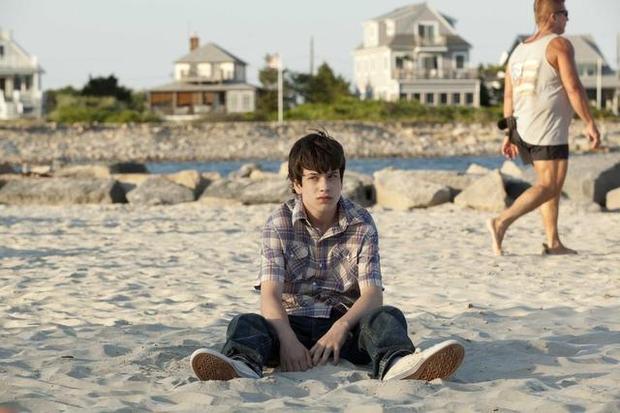 Duncan, his single mother Pam (Toni Collette), her boyfriend Trent (Steve Carell), and Trent’s teenage daughter Steph (Zoe Levin) are heading for a summer vacation at Trent’s beach house somewhere in the Carolinas.  En route the beach house, while Pam and Steph are asleep, Trent asks Duncan where he places himself on a scale of 1-to-10.  Trent then tells the boy he’s only a 3, which does nothing for the boy’s self esteem and plenty for Trent’s personal power trip.  Trent then adds tells the boy he better start to work a little harder if the four of them are ever going to become a family.

It is immediately evident when they arrive at the beach that Trent is a party guy because his half-drunk neighbor Betty (Allison Janney) wants him to help her get fully drunk.  It isn’t long before their boating buddies Kip and Joan (Rob Cordury and Amanda Peet) are sailing, drinking, and dancing.  As Susanna (AnnaSophia Robb), Betty’s daughter put it, “It’s like Spring Break for adults.”  Been there – looking forward to that.

It seems everyone except Duncan has a way to cope with a long summer at the beach.  Trent’s daughter Steph steals her father’s beer and hangs with snobby friends.  Betty’s son plays with Star Wars action figures.  The grown-ups drink around bonfires, on boats, at dinner, and most everywhere.  Duncan, striving for any sense of independence or solace, does exactly what I did at his age – he goes for bike rides.  This leads him to Water Wizz, a low-budget waterpark, where he meets Owen (Sam Rockwell), a wise-cracking, verbally inappropriate (but fun) guy who senses Duncan’s lack of self worth and befriends the boy.

After Owen finds a job for the boy at Water Wizz, things improve for Duncan.  He better tolerates Trent’s personal attacks, his mother’s dwindling attention towards him, and his distant father’s inability to communicate with him.  He has friends, not just at the waterpark but also the literal girl next door who shuns the snobby teens and gets to know Duncan.  However, once all is well in a movie, then something has to go wrong, and this is where the story begins to lack a bit.  An important conflict develops between Duncan’s mom and Trent, but it seems forced, mishandled, and little more than a “happening” created to then end the film.

Liam James (2012, Fred Claus) is as awkward and you can expect without being so uncomfortable in his own skin as it make it uncomfortable for us to watch him.  His posture is hunched, his words mumbled, his eyes averted, and his dancing needs work.  All good things.  Toni Collette (The Sixth Sense, Little Miss Sunshine) is a mom balancing her relationship needs between her son and boyfriend but leaning more towards the boyfriend and not enough towards the son.  Steve Carell (The 40-Year Old Virgin, Dan in Real Life) takes a rare, non-likable role as the selfish boyfriend who goes too far in more ways than one.  AnnaSophia Robb (Soul Surfer, The Carrie Diaries) is a similarly awkward girl who, like most sitcom mothers, seems prettier than you’d expect to find interest in the awkward guy.  Everyone does their job – which is to step back far enough so we can watch Owen help Duncan find himself.  Rockwell as Owen is somewhat reminiscent of Bill Murray in Meatballs, (thanks, Ron) providing enough comedy while still having a goal to achieve. 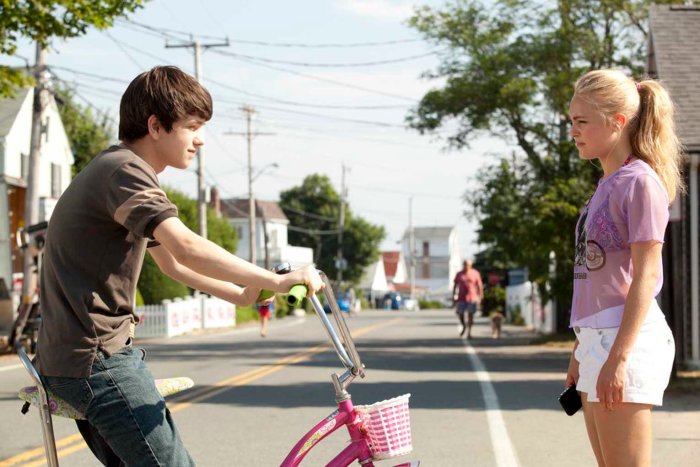 Liam James as Duncan and AnnaSophia Robb as Susanna

But just as Duncan has an identity crisis, so does the entire film.  From the previews, I was convinced that the film was set back in the late 70’s, a time when I was lucky enough to have these same summer vacations.  The 1970 Buick Electra, the 80’s Pontiac Sunbird, the clothes, PacMan machine, older version of Candyland, and music all seemed to point back to another time, so I was very surprised when I saw the kids with cell phones and listening to Ipods.  I have trouble believing that Duncan or anyone his age today would really be listening to and singing an REO Speedwagon song unless it were re-created by the tv show Glee.  Once I realized I had been wrong about the setting, I was a bit disappointed and then distracted.

Also distracted was Trent from Pam.  They just never seemed to really be “in a relationship,” and we find evidence later that there’s a fairly good reason for the distraction.  However, that distraction was also a bit forced and, as stated earlier, felt like a contrivance in order to bring around a climax to the story, a climax at which you’re not really sure if it is or isn’t until there isn’t really anything else that can happen.  I won’t spoil that for those who might choose to watch the film because it is worth watching, but it won’t be as outstanding as I hoped.  Writers/directors Nat Faxon (The Descendants, The Cleveland Show) and Jim Rash (Community, Reno 911!) also work at Water Wizz and likely had their own beach house vacations as well as their own awkward teen phases.  They also likely knew it would be a good combination for a story, but they missed the story part just a little bit.

With a little fairness, I must admit that because I took so many of these vacations, and because I spent 7 years working on the Jersey Shore boardwalk, I went into the film with greater – and possibly unfair – expectations.  I was likely keeping my own memories at hand and expecting the film to live up to that, which is just not possible.  My bad.

Teacher gives it a B.