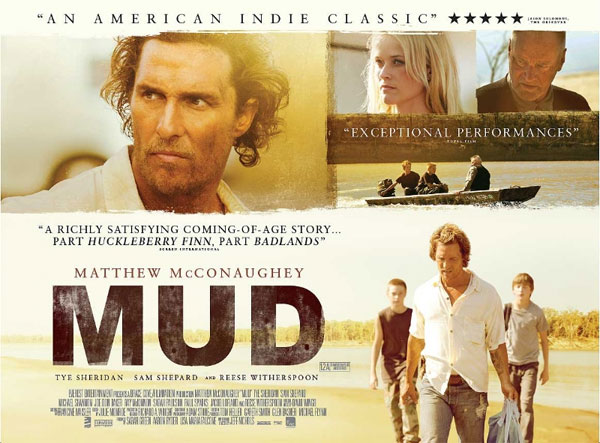 When the person you look up to the most is a homeless murderer pursued by both the police and bounty hunters, there probably won’t be a whole lot of good in your life.  And when your best friend’s name is Neckbone, you have to start to wonder.  Ellis, 14, is quietly waiting for something.  His parents, on the verge of divorce, won’t talk.  Their home, on a dock that floats on the Arkansas side of a Mississippi River branch, will soon be taken by the river authority.  Can it get any worse?

Like most teen boys in the summer, Ellis (Tye Sheridan) and Neckbone (Jacob Lofland) like to explore.  Rumor has it that a recent storm left a boat in a tree on a small, river island.  Up early one morning, they take a skiff to find out.  Not only do they find the boat exactly according to the rumor, but someone is living in it, and someone is waiting for them to return to their skiff.  A man who calls himself “Mud” (Matthew McConaughey) appears unsteady and desperate, he eventually proves to have more of a reason than the boys to be afraid.  He does no more than ask them to bring him some food, which they don’t agree to do and quickly leave. 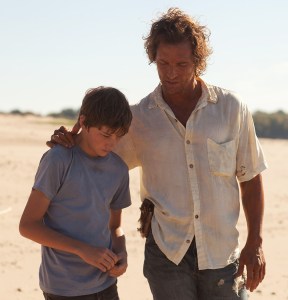 Most boys, or most kids in general, like having a role model, someone to admire.  Neckbone has his womanizing uncle/guardian, and now, Ellis has Mud.  When Ellis returns to the island with much appreciated food, a friendship is beginning.  Mud, neither the film nor the character, is not simple.  He has a cross made with two nails in his boot heel to ward off evil spirits.  He believes his off-white shirt, which is whiter than it should be for his situation, is more “protection” than the semi-automatic in his waistband.  He is incredibly superstitious, which somehow makes him less threatening.  He knows he’s living on borrowed time because he miraculously survived a poisonous snake bite as a child, and since then he’s devoted his life to Juniper, the woman who saved him.  That’s where things get tricky.

After Juniper (Reese Witherspoon) was beaten up by one of the Carver boys, Mud killed him.  King Carver (Joe Don Baker) is the head of a local, small-time mob as well as the dead man’s father.  He and his other son are hunting Mud, and they know Juniper is way to find him.  Mud plans to take the boat from the tree, make it seaworthy, and sail away with Juniper, but she’s being closely watched by the Carvers.  Mud has a shopping list of things the boys must get to make his escape, but as Mud gets closer to fixing the boat, the state police get closer to finding Mud.  As Ellis’s parents drift further from each other, he drifts closer to Mud and closer to danger. 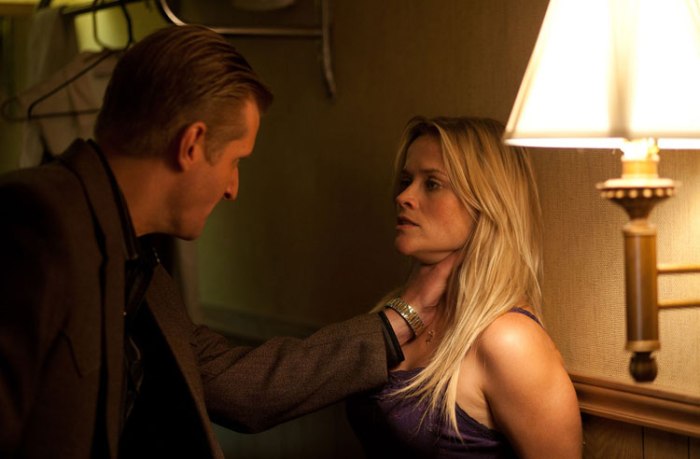 Tye Sheridan (The Tree of Life) plays Ellis like a can of beans sitting in a campfire.  He constantly seems ready to burst with something, and occasionally he sure does.  He pops a senior boy in the face for picking on Mae Pearl, a girl for whom he once had a crush.  He leaps on one of the Carver boys who threatens Juniper with a knife.  He is fearless, but back at the house he’s helpless as he watches his home – both literally and parentally – fall apart.

The opening minute shows his mother (Sarah Paulson) trying to talk about their marriage as his father (Ray McKinnon) holds up a newspaper and wants no part of it.  His father, known as “Senior,” talks plenty to Ellis, but nothing he says makes any sense to a boy wondering not if but when everything is going to fall apart.  This is why he invests so much in Mud and Juniper, because nobody else in his life seems to care about the people they’ve promised to love.  Mae Pearl invites Ellis to a party, where he gives her a bracelet and asks if she’ll be his girlfriend.  He interprets her kiss, probably his first, as a “yes,” but when he explodes like a can of beans in a fire when he sees her in a car with another guy.  When Juniper’s life is threatened, he leaps on the man’s back not just because it’s wrong but because it is a threat to her reunion with Mud.  These episodes earn him a few bruises on his face but not his ego.  He seems to grow stronger with each punch, both given and received.

Sam Shepard plays Tom Blankenship, a gruff, old friend from whom Mud needs help and Ellis’s family happens to know.  Like everything and everyone else, Shepard is a kettle waiting to boil as his home is also going to be taken by the river authority.  But he’s a military vet, and he has had plenty of experience with his back to the wall.

Writer/director Jeff Nichols keeps an excellent level of tension in Mud.  As with Ellis, the entire film is a kettle waiting to boil, and eventually it does.  Whether it’s Mud and Juniper, Ellis and his father, his father and his mother, the Carvers and Mud/Juniper, or state troopers and Mud, the tension is as thick as mud.  Nichols brought this same tension to Take Shelter, in which a man is haunted by visions of a doomsday storm, yet nobody else seems to notice.  He digs up his yard to build an underground shelter, causing friends and family to think he’s losing it.  What worked so well about that film was that you never know until the final shot if he is on the mark or off his rocker. 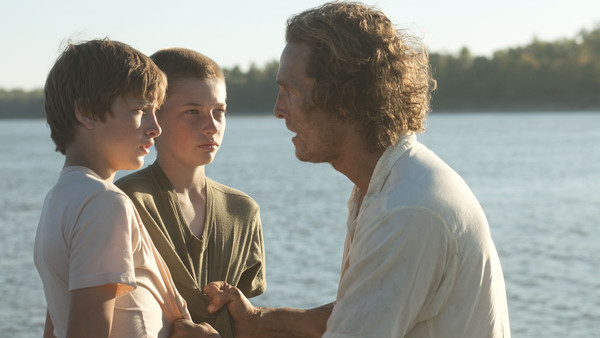 Mud is a great but not flawless “coming of age” story, probably the best I have seen since Stand By Me.  That’s saying a lot.  It is not clearly explained why the family home is being taken away by the river apps already. The climax is satisfying, but there is one element that is too convenient, which I will not spoil.  What I also won’t spoil is whether Ellis’s parents are going to be kept together when their son is at the brink of death.

Mud shows that you can make a good movie without millionaire characters who jet off around the world at any given moment.  It shows what you can do when you have a good story, motivated actors, and a director who knows what he’s doing.  Neither Mud nor his friend Tom has led exemplary lives, but we’re given enough reason to forgive and root for them.

In the opening sequence, Ellis and Neckbone kill the boat engine as they approach the Mississippi.  The boys look at the river at it with both awe, hope, and respect, knowing that anything could happen, either good or bad.  A similar shot (unexplained here because of a spoiler) with two people in a boat approaching a great body of water is used to close the film.

Sometimes, as long as something happens, it will be better than nothing.  Most of us can probably look back at our awkward teenage years and remember how often we held the same thought as we looked for people and places to hang out on any given Saturday night.  Something – either good or bad – was usually better than nothing.