I’m a huge Disney fan, so to see Tom Hanks, this generation’s Jimmy Stewart, bring Walt Disney to life in Saving Mr. Banks was purely adorable and left me misty eyed several times.  I visit DisneyWorld at least once every year.  I could take you from Splash Mountain to Space Mountain blindfolded.  I could tell you the only place to find a beer in the Magic Kingdom and where to get both a free shot of tequila and endless, free soda in Epcot.  However, unless one is very much a fan of the Disney Empire, I cannot strongly recommend Saving Mr. Banks.  However, if you enjoy true stories come to life, then you might be more inclined to enjoy this one because it is largely accurate.

After reading Mary Poppins to his daughters, and after they begged him to turn the book into a film, Walt Disney spent 20 years pursuing author P. L. Travers (Emma Thompson) for the film rights to her book.  Mrs. Travers finally relented, but only after her accountant reminded her of two important things:  1. Disney was willing to give her script approval, and 2. She was running out of money.  Thus begins her journey from London to California, where her every – most every whim would be placated until she finally relented.  She eventually gave in, but not before throwing script pages out a window, making fun of legendary song writer Robert Sherman’s (B. J. Novak) World War II leg injury, and demanding there be no character animation in the film, to which Walt said, “Anything else?” 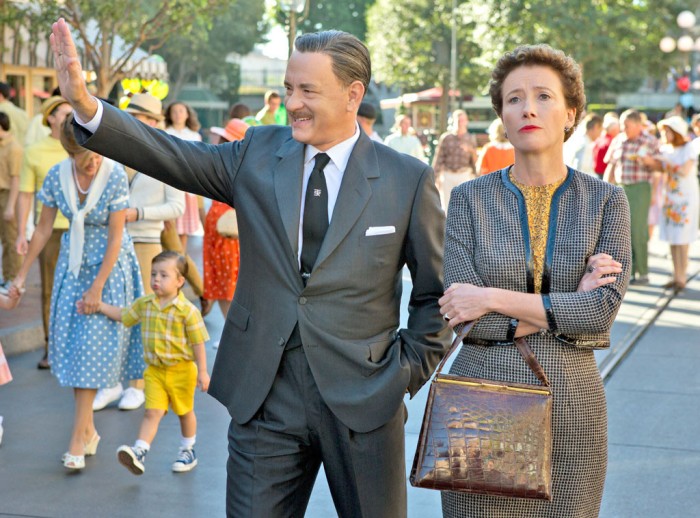 Through awkward and sometimes poorly timed flashbacks, we learn that Mrs. Travers grew up Helen “Ginty” Goff (Annie Buckley) in Australia, daughter of a neurotic mother Margaret (Ruth Wilson) and fun but alcoholic father Travers Goff (Colin Farrell).  When her father, a banker – the inspiration for “Mr. Banks” – eventually dies from drinking, her mother attempts suicide and fails but is subsequently rather useless.  That’s when Aunt Ellie (Rachel Griffiths) arrives with her big hat, umbrella, and carpet bag to save what is left of the family.

But Saving Mr. Banks is more about the arrival of “Mrs. Travers,” as she insists on being called, into the world of Disney, where everyone goes by first names, especially “Walt,” and trays of goodies arrive unannounced, and people sing and dance and socialize and have fun, because Disney = fun.  Unfortunately, Mrs. Travers life had not been fun, and she has trouble shaking that.  Even if Mary Poppins was such a beloved character, she only existed because her father died and her mother tried to die, and those are pains not easily forgotten.  Finding a three-foot tall stuffed Mickey Mouse on the bed of a Hollywood hotel room might work for most of us, but not Mrs. Travers.  Not immediately.

Director John Lee Hancock (The Rookie, The Blind Side) did not have an easy time of it because there are two stories here, and neither is enough for a film on their own.  So when you have two stories, you really have none because sewing these two half-stories together is no easy task.  This isn’t really a “Disney” film with all the usual fluff and fanfare, but it’s not quite the story of a child who comes through a tragedy with self-made success.  Thompson (Harry Potter series; Love, Actually) would be very successful at silent films as quite often she says plenty with just eyebrows and a tight-lipped frown than Hanks does with a wink and a smile.  This is no complaint about Hanks, as he’s marvelous for the short time he’s on screen, which is part of the films lack of energy – just not enough Hanks – but it’s not his story.

Novak (The Office, Inglorious Basterds) and Schwartzman (Moonrise Kingdom, The Grand Budapest Hotel) as the Sherman Brothers successfully stay out of the way, but not without showing mixed feelings about the demands of Travers, despite the Disney business model that “everything is always just peachy.”  Their job is to make the woman smile, just bring a little cheer to her face and convince her that Walt’s version of Mary Poppins, though not very much like the real woman, will be loved by all, and all will be willing to pay to see her.

All these people are real, were real.  The one fictional character, a composite of several, is Mrs. Travers’s limousine driver, Ralph.  Paul Giamatti (12 Years a Slave, The Ides of March) is the soft everyman who points out the lovely, sunny California sights to perhaps melt the ice that surrounds the grumpy Londoner.  The man never stops his optimism, regardless of what she does to step on it.  Eventually, he’s the one who breaks the ice princess.  Maybe not breaks, maybe just fractures.

If you want to cry that Disney took too many liberties with the story, go right ahead.  Truth be told, Mrs. Travers had already agreed to the film deal before leaving London.  When Mrs. Travers cries at the end, reality was for a very different reason.  And the real Disney dealings were a little more cutthroat than they appear here, but so what?  Enough of Saving Mr. Banks is the real thing, and that’s good enough for me.  Not great, but good.  Especially good is the audio tape of the real Mrs. Travers that closes out the credits.

Teacher gives it a B.