American Hustle is about 2 hours 18 minutes long.  I’m very certain you’re going to love the first 2 hours 5 minutes.  After that, well, opinions will differ.  The film opens with the graphic “Some of this actually happened.”  Although the film uses the term “Abscam,” the story is a very loose translation of the true story, but forget about that and just try to enjoy it (or not) for what it is and not as a representation of any true story.

When the soft, round Irving Rosenberg (Christian Bale) isn’t happy enough with a successful New York City dry cleaning chain, an exciting but dim wife Rosalyn (Jennifer Lawrence), and an adopted son Danny, he dabbles in selling counterfeit paintings.  When he wasn’t happy enough with phony art, he seduces the exciting but smart Sydney Prosser (Amy Adams) and expands to swindling investors.  Thanks to Sydney, posing as “Lady Edith” and claiming to have ties to the Royal Bank of London, Irving’s shady business dealings blossom enough to get the attention of the FBI, and he is arrested in a sting operation by the overzealous Agent Richie DiMaso (Bradley Cooper).

Just as Rosenberg was not satisfied with the dry cleaning chain, DiMaso is not satisfied to just arrest Rosenberg and Posser.  Swimming in an ocean of corruption and greed, DiMaso believes he can catch something better and offers Rosenberg a deal: get me four bigger fish, and I’ll throw you back.  Deal accepted.  Where to find those bigger fish?  New Jersey, their neighbor just across the bridges, was as polluted a pond as any.

It was the late 70’s, casinos are going up, contracts are bought and sold, briefcases of cash and sliding back and forth with no questions asked.  Okay, maybe a few questions, such as, “Why stop at four big fish when we can get even more?”  Mayors, Representatives, and Senators had already taken the bait.  How does one get mobsters with all their money?  To make it Biblical, cash begets cash.  Money attracts money.  To get mobsters, you need bigger money: a sheik, or an agent posing as one.

As the game escalates, the big shots in the FBI got scared, cautious.  Was it legal?  Entrapment?  Yes and no, but only because the laws had not been written.  Not yet.  It was called “Abscam,” which some considered a little racist because the “Ab” had to do with the Arab sheik.  “Politically correct” was floating around Europe but was still half a decade from reaching us.

David O. Russell (The Fighter, Silver Linings Playbook) brings us a 10-time Oscar nominee that was shut out, went 0 for 10, batted .000 for you baseball fans, and it surprises me only a little bit.  Everyone was fabulous except Lawrence (Silver Linings Playbook, The Hunger Games), who fell victim to yet another actress who can’t grasp the Jersey Girl accent.  C’mon, people.  It’s not difficult.  It’s all about the R’s – you put them in where they don’t belong, and you take them out from where they do belong.  Although I picked Adams (Her, Man of Steel) for Best Actress, she was just as worthy as winner Cate Blanchett.  She’s just plain dynamite, whether it’s her English or Albuquerque version, just dynamite, and without that much cleavage either.  (#sarcasm)  She shows off what she can for almost all 2+ hours and leaves little to the imagination, but that’s a good thing.  While Bale and Cooper are trying to out-do each other with the bribery scam, she’s out-doing both of them and scamming the both of them at the same time. 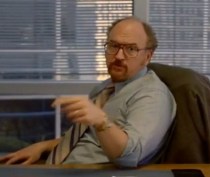 Bale (Out of the Furnace, Batman Begins) and Cooper (Silver Linings Playbook, A Place Beyond the Pines) play characters who are such opposites in personality yet equal in the mental strength of what they wanted and how to get it.  They just use different streets while heading to the same address.  Cooper is out of control but doesn’t let you see it – except Sydney, and his boss.  Louis C.K. (Louie, Blue Jasmine) is on screen not nearly enough as he very successfully shifts from his usual, actual wise guy into a meek FBI supervisor.

Robert DeNiro (take your pick) makes a short appearance as mob boss Victor Tellegio.  Although only on screen a few minutes, he is not at all short on depth as you might literally hold your breath until he exits.  See if you can guess who he is attempting to look like by wearing a pair of glasses very familiar pair in the film industry.  On top of all this, I haven’t even mentioned Jeremy Renner (The Bourne Legacy, The Hurt Locker) as Carmine Polito, the corrupt mayor of Camden, NJ, who unknowingly brings the scam to Atlantic City.  He could have been nominated for Best Supporting Actor, without a doubt.

American Hustle is not nearly the first film I have watched with the expectation of disliking it, but that doesn’t happen without good reason.  In this case, any positive review I read spent too much time covering the costumes, music, and other audio/visual decorations that brought them back into the late 70’s.  Yeah, those things are nice, but they aren’t part of the story.  Too many films can lure into the mild euphoria of a successful time shift, but they don’t deliver on the story, you know, the important part.  So with the music, hair, and clothing, that’s what I was worried about.  What I am worried about, and you should be too, is that last 13 minutes.  If you want to know what goes wrong, continue reading after the trailer.

Teacher gives it an A-.
http://www.youtube.com/watch?v=NqgjPRNRDSY

So, where was I?  Oh, yeah, 13 minutes.  Russell had a good story, but he ran into trouble with the ending.  He had worked so hard to make good characters that even the criminals were likable, which happens more and more these days.  Russell was worried that audiences might not react positively to the bad guys actually having to pay for their crimes, so he Jerry-rigged a way for nobody to really get in much trouble.  Rosenberg, DiMaso, and Posser set up a meeting to get the biggest fish in the pond, Tellegio, but Tellegio didn’t show up, only an attorney.

The Three Stooges were about to leave but then asked the attorney if he were willing to not just wire the bribe money to their account but also state what they would get in return for the bribe.  The attorney carefully specified a laundry list of ethics violations, and The Stooges – with the help of a recording device – leave happy enough.

Back in the FBI office, there’s a problem.  It seems that Rosenberg might have tried to make off with the bribe money because it didn’t show up in the phony account.  He explains that he gave the bank number as supplied by DiMaso, which turns attention to the agent.  Also, the evidence against Tellegio is no good because it seems, upon returning to that attorney’s office, he isn’t actually Tellegio’s attorney.  In fact, there’s no evidence of any attorney there with any connection to Tellegio.

None of this really makes any sense.  The FBI is too precise for such a mistake, but it serves as I said – to let Rosenberg appear to have lived up to his end of the deal to deliver a real big fish and also put a few heavy bucks in his pocket.  I didn’t like it, and I don’t expect you to like it either.