In further honor of baseball’s 2012 season, and in hopes of another Yankee world series win, I’m re-posting another baseball book review.  This one’s about the man who single-handedly saved baseball when it was about ready to disappear and was considered a failure.

As previously stated in another book review, I love baseball and the Yankees. Therefore, it was a no brainer why I’d read The Big Bam, a richly detailed biography about George Herman “Babe” Ruth, by Leigh Montville. It was filled with things I both appreciated and didn’t want to read. I’ve always had a very high regard for Ruth because he single-handedly saved baseball when it was almost forgotten. He did save baseball, and he turned a game for boys into a respectable (until recently) industry. He grew so famous that he became a question on a test to check if someone really was an American trying to re-enter the country.

I knew that before Ruth started pounding the ball over the fence, people didn’t really care about homeruns. Fans actually were disappointed by roundtrippers because the homerun was considered a cheap run and not very strategic. Most fans then, but very few now, were more excited to see a run manufactured with a single, a stolen base, a ground ball to second, and a flyout to left center. What I didn’t know was how much of a creep Ruth was. He grew from an abandoned, penniless boy in an orphanage to a wealthy man who abandoned his wife and child. He should have been more grateful and humble, but then he wouldn’t have been Babe Ruth.

There’s no telling how many times a biographer takes liberties with the truth, especially when there’s no way for anyone to disprove what he or she has written. In this book, however, Montville often makes a specific effort to point out that the tale he’s telling might be true, but it might not be true. Either way, he’s going to tell the most commonly known legend and leave it to the individual to either stand with that legend or just let it go.

This approach is most evident from start to finish. The book opens with Ruth’s father bringing little George on a bus ride to a home for “incorrigible,” orphaned, and other unfortunate children. Montville is sure to let the reader know that his description might not be the truth, but it is the best version that he can find through his many interviews. Just like the story about Ruth telling a sick boy how he’d hit a homerun for the lad or the called shot in the World Series against the Cubs, there just aren’t any facts, only a lot of speculation and foggy memories passed on and on.

Montville doesn’t shy away or play anything safely. Ruth was a generous tipper and spread the wealth whenever it felt right. However, he also showed his fangs, as when he challenged an umpire to a fight on the field or stood on the dugout, screaming at fans who were treating him with less respect than he believed he deserved. Although he wasn’t African-American, he was regularly called names because of his large lips, olive skin, and flat nose.

Yankee Stadium was built because of him, so I didn’t realize that it literally was The House that Ruth Built. Yankee fans may have wondered why the grandstands didn’t make a complete circuit of the stadium. Instead, there’s a single level of bleachers running from right to left field. It’s explained in the book, and it’s because of Ruth. The New York Daily News was created because of Ruth, so I guess it should be called The Paper that Ruth Wrote. 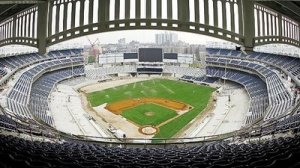 12 thoughts on ““the big bam” by leigh montville”