I’ve been playing golf for about 25 years but not consistently.  The only reason I started playing was to get someone else – a golfer – to agree to occasionally play tennis with me.  Seemed a fair trade, except that tennis only costs about $3 for a can of tennis balls, while golf costs anywhere from $40 to $100 for greens and cart fees, and a box of balls is anywhere from $15 to $25, depending on how good you think you are.

I had stopped playing golf about six years ago, but then an interesting event caused me to start playing again.  I needed job protection.  In a previous job, we had a yearly golf outing in June.  It was so much fun that I wanted to recreate that at my new place of work.  When I learned that the president of my union was interested, the deal was sealed.  I pursued a group of four as a way to start the annual rite.  Union president, head of technology, a fun guy who’s a poor golfer, and me.  What a foursome.

We’ve played fairly regularly since then, and the job protection angle worked because the union president is now one of my best friends.  However, it had rekindled my enjoyment for golf and killed my tennis time.  Also, the golf outing has progressed into monthly poker games with the same group.  Hopefully there’s a pub crawl in our future.

Golf has several items to check off as you reach them.  Obviously, there’s the hole in one, which I don’t even think about.  When starting out, you want to break (score less than) 100, which I did a very long time ago.  Then breaking 90, which I did about ten years ago when I had a membership and played about five days a week.  Although I have not yet broken 80, I did once get exactly 80, and I’m proud of that one.  Last week, in my first round of this year, I scored what’s called an Eagle.

The average hole on a golf course is a par 4, meaning they expect you to get the ball in the cup in four strokes.  1. tee off.  2. hit on the green from the fairway.  3 and 4 – two putts maximum.  Should you score one less than the par on any given hole, that’s called a Birdie.  But should you score two less on a hole, that’s an Eagle. 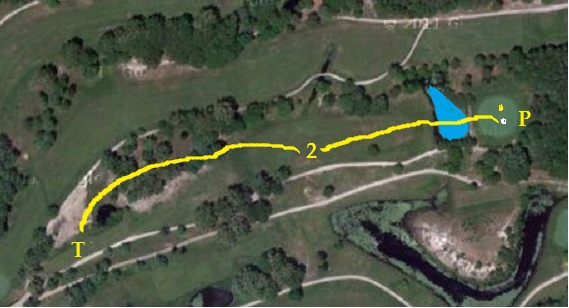 In the picture above, I began from the yellow T on the left.  It was a breezy day, wind blowing left to right – also called “at my back” – and instead of using my driver, which keeps the ball as low as possible, I used a 3-wood, which lofts the ball a little higher.  That choice was so that my ball would get up into the wind and carry a little further than usual.  Another advantage of the 3-wood is that it tends to stay straighter than a driver.  Another reason I avoided the driver was because, on the course where I usually play, my tee shot from the 14th tee usually ends up on the 18th green.  That’s a bad thing.

So, on this par 5, my tee shot went about 250 yards, leaving about 160 left.  Some golfers might say, “Hey, that hole is only 410?  That’s too short for a par 5.”  Maybe so, but there’s about 50 yards of water in front of the green, which usually forces you to lay up, thus adding that extra stroke to the par 5.  From where the yellow 2 is, i hit a 5-wood that landed where the yellow P is over to the right, sticking about 10 feet from the cup.

From there, I had a slight uphill and slight break to the left, which slipped in very easily.  Three strokes on a par 5.  My first eagle.  In the end, I shot a 94, which isn’t terrific, but I gladly accepted for my first round of the year.

Next round – this Thursday.

37 thoughts on “my first eagle”