Wow.  Five days in beautiful, downtown Champaign, Illinois.  Too many commas there, and too many restaurants instead of home-cooked meals.  I’m sure I gained a few pounds, but it was worth it.

For those of you who aren’t aware of film critic Roger Ebert, this is the 14th year in which he has held his annual “Ebertfest,” or a festival of what he considers overlooked films, with extras.  For over a dozen years, he’s brought over a thousand people to celebrate film in his midwestern hometown.  Although several surgeries have threatened his health and cost him his ability to speak, nothing has stopped his ability to communicate with good-hearted film fans and just plain nice people who want to share a nice movie and learn something in the process.  Over the next few days I’ll post my thoughts about the films as well as some of the insights that were discussed in the Q&A that followed the films.  Each film was accompanied by one or more people involved with making the film, including writers, directors, producers, and actors.

Before I go into much detail about my first film festival, also my first Ebertfest, I should pat myself on the back for driving 800 miles, a.k.a. 14 hours straight, only stopping to whiz or eat a burger with a Mountain Dew or coffee.  I should also pat myself on the back for not stopping at the place in West Virginia with the sign that said “Free Beer.”  Admitting that will not help me win any new friends.  Admitting that it was a strip bar?  Well, that’s different.  A strip bar that says “free beer” on the sign.  I think I’ll have to leave a little earlier next year with one less stop at Cracker Barrel and one more stop – somewhere else.

Before I go further into non-detail about the film festival, I should also remind myself of a few things when I plan for next year.  While it was cool to save $100 through Travelocity by staying in one of their “preferred discount” rooms, it was not cool to spend about $100 in gas money because of how far away that room was from the theater, not to mention the extra time lost just from driving.

Still avoiding detail about the film festival, part of entertaining myself during that drive included making up new slogans for the various states through which I drove.

Ohio – “Rivers and baseball out the wazoo!”

Illinois – “Land of Lincoln – up until the end.”

Also, note to the Best Western in Danville, Illinois:  those lines in the metal doors aren’t fooling anyone.  They’re not made of wood. 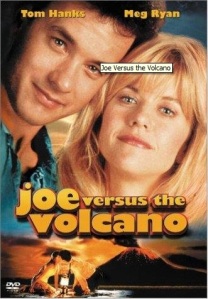 Joe versus the Volcano

I don’t know why I didn’t pay attention to this movie back in the 90’s.  Might have been that I was getting fired right around its release.  Then again, that might have caused me to miss a movie in ’91, ’99, ’04, etc.  Regardless, (for those in Philly – “irregardless”) it was a fun story that featured dialogue almost as witty as When Harry Met Sally and almost as scenic as Dude, Where’s My Car?  Add to that a fabulous shot of Abe Vigoda in a headdress and grass skirt, and you can’t lose.

Joe (Tom Hanks) is just a number at work, punching a clock and doing nothing but absorbing fluorescent lights, making him more pale than musician Jack White.  When he goes to see a doctor about a pain, his diagnosis is two fold:  1. He’s got a “brain cloud.”  2. He’s going to die.  And, since he’s going to die, he may as well do something positive and throw himself into a volcano as a sacrifice.  Again the benefit is two fold:  1. He allows an innocent and non-terminal patient to live, and 2. It’ll cure him of his mullet.

Meg Ryan plays three roles, probably because she was coming off the immense success of When Harry Met Sally, and it would not have been wise for her to play only one of those roles because she just wouldn’t have been on screen enough.  She plays a distracted secretary and twin sisters with two very distinct personalities.  One is a wholesome blonde and the other an assertive, pushy redhead, both the daughters of a wealthy businessman who has a lot of interest involved in why Joe agrees to leap into the volcano.  Since Joe now has nothing much to live for, he’s inspired to actually live, have fun, take risks, and just plain “go for it” because there’s nothing to lose.

The movie was a risk for first-time director and Oscar-winning screenwriter (Moonstruck) John Patrick Shanley, but the studio was likely banking on the drawing power of both Hanks and Ryan, which pays off well enough for a good comedy but not for the box office they had hoped for.

The reason to see this film is none of the above but instead – now – three fold.  1. Tom Hanks ability to be physically and verbally funny.  2. Meg Ryan’s ability to look as cute as anyone, thus further explaining why so many men have included her in their online dating profiles as the type of woman for whom they’re searching.  3. Abe Vigoda. 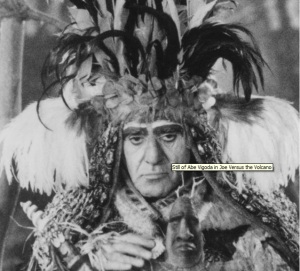