like the psychological suspense, with people being chased by something

it’s thrilling, but they’re not shy about tossing in the nudity and at least a suggestion of sex

Written by Peter Benchley (novel and screenplay) and Carl Gottlieb

Very few bathers were hurt during the production of this film

“When a gigantic great white shark begins to menace the small island community of Amity, a police chief, a marine scientist and grizzled fisherman set out to stop it.”

Few movies had so much promise at inception.  Few movies had so much go wrong.  Few movies had the brewing of an upcoming wonderboy director who was so unproven but with so much potential.  And few movies had a shark that couldn’t swim.  That Jaws was made with mechanics and not CGI was a blessing, not deficiency, because filmmakers tend to go a little too far with what their creatures can do.  I’ve seen shark movies in which the damn fish had furrowed eyebrows while snarling when about to attack.  Sharks don’t do that.  The shark in Jaws did what sharks do.  They eat things with the same attitude that we would have while opening a jar of peanut butter.  Business as usual.

As with The Wizard of Oz, I’m writing about Jaws as if you’ve seen it twice, but I’m commenting on it as if you, like me, have adored the film for almost 40 years.  It was the first movie I had ever seen after having also read the book, but a real book, a real grown up novel.  I was in 6th grade when I read it after seeing the fascinating cover of a book sitting on a table.  It was my uncle’s book, and he told me to go ahead and read it if I wanted.

Jaws was mega-successful on several levels.  You can’t go to the beach without thinking of it.  When you hear the theme by John Williams, you identify it immediately.  While it was not the first movie with a “monster” that stalked people and had to be killed – it was the first I could think of that was done realistically, not like a King Kong, Creature from the Black Lagoon, or a Night of the Living Dead kind of monster.  Frankenstein and Dracula are obviously just fictional horror, but it’s a lot more terrifying when the monster can actually be real and has probably been swimming right next to you without you even knowing it.

“A woman who lives in a darkened old house with her two photosensitive children becomes convinced that her family home is haunted.”

I adore Nicole Kidman for various reasons.  It probably all started when she starred in Dead Calm with Sam Neill, playing a wife who is kidnapped by a mass murderer on a boat drifting at sea.  She’s not just stunningly beautiful but she is a fabulous actress.

In The Others, she plays a mother whose husband is away during World War I while she and her two children deal with living alone in an English countryside manor.  Alone?  Not quite.  She’s growing rather paranoid as things seem to happen.  She insists that all doors be locked because they seem to open and close on their own.  So do the curtains, but they pose an extra threat because her children are very light sensitive.  A piano plays by itself, until you open the door to find nobody in the room.  She advertises for hired help because the manor is just too big to take care of on her own, and a lovely elderly couple shows up who claim to know the house well because they’ve been caretakers there for the previous owners, which is evident in their knowledge of the estate.  But their knowledge is rather deep, and their awareness and silent stares too sharp and specific to simply lie on the surface as their history of being just previous caretakers.

Have I confused you?  Good, because The Others has one of the best “Pow” endings of any film in the past 20 years.  It’s a shame that few people are aware of it.  Hopefully, you’ll see it and increase the number of those aware of The Others.

Favorite scene:  The piano is playing, no it isn’t. 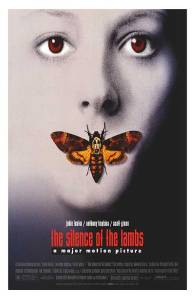 “A young FBI cadet must confide in an incarcerated and manipulative killer to receive his help on catching another serial killer who skins his victims.”

Feel free to argue if Silence of the Lambs should be equated with a “slasher” film or psychological thriller, but I see it as both in one.  The main reason this film is in this list at all is because of one very important moment that has never happened with any other film than this – which is when I sprinted, literally sprinted, to my car after the theater let out.  There has never been a film after which I was more afraid to be in the dark and without an armed contingent.  You can’t argue that there’s blood and/or slashing, but you can argue as to whether or not it’s there just to be there or there because it’s just friggin’ gloriously done.

Anthony Hopkins gives his most memorable and creepified performance as a former psychologist, now an incarcerated murderer who is willing – with conditions – to help the FBI track down a serial killer.  He’s happy to help, provided he gets a few things in return that don’t really make sense, but they add to the fun so much that we’re willing or absent minded enough to ignore it just for the sheer violent beauty of the moment.

Any film that takes five major Oscar categories – actor, actress, director, picture, and screenplay – cannot be ignored.  At the same time, there have been films I’ve hated that have won several of those categories, but there is so much that’s right about Silence of the Lambs  that it cannot be left off any list in which it’s in the running in any capacity.  On a personal note, I bought the Italian-language version of this movie poster for my classroom.  One day when I was absent, another teacher stole it.  I hate teachers.

Favorite scene:  “It puts the lotion in the basket.”

Close 2nd – The Night of the Hunter

Written by John Michael Hayes, based on a short story by Cornell Woolrich

“A wheelchair bound photographer spies on his neighbors from his apartment window and becomes convinced one of them has committed murder.”

Jimmy Stewart.  Doesn’t hurt that he’s my all-time favorite actor because he never really acts.  He just – is.  He and Jeff Goldblum (very underrated) do that better than anyone.  By the way, how do you put Grace Kelly in a movie and make it so she doesn’t seem important?  Two ways – 1. Have a superior story and 2. Let Alfred Hitchcock direct it.  He was notorious for having tremendous crushes on leading ladies and then punishing them because he couldn’t have them.  I’m not saying he did that to Grace Kelly like he did to Tippi Hedren, but he didn’t do Ms. Kelly any favors either.

L.B. “Jeff” Jeffries suffered an incident on a rooftop that caused him to retire from the police force as a detective.  That he then took up photography is only a device and excuse for him to have a camera with a powerful zoom lens and a flash.  Regardless, he sits in a wheelchair and spies on his neighbors in the building across the street.  Kelly, his girlfriend whom he seems to be disinterested in, thinks he’s nuts when he claims that one particular neighbor has been killed and that her husband is responsible.  Little by little, circumstantial evidence seems to be adding up, but it’s still circumstantial.  Comic relief is provided by Stella (Thelma Ritter), his nurse and caretaker, who believes him when nobody else does.

One of the more impressive elements of this film is the limited setting, in which Stewart is wheelchair bound and only able to look out his window throughout the film.  A lot had to happen in a very limited space, and leave it to Hitchcock to pull it off brilliantly and Stewart to bring it all to life with such restrictions.

Vertigo, another Hitchcock-Stewart film, was named the best movie of all time ever ever ever by a group of really smart film-going people.  Rear Window blows that film away.  Vertigo had plot holes you could push a wheelchair through and a few dramatic moments that seemed laughable and incredibly different from what a real person in real life would have done.  Not only is it not the best film all time, it’s not even the second best Hitchcock film.

Favorite scene:  Jeff’s caretaker narrating as they look at all the people in the windows across the street. 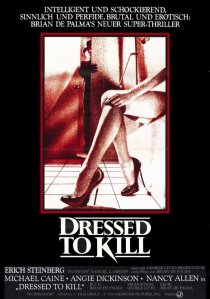 Nominated for nothing significant.

“A mysterious, tall, blonde woman, wearing sunglasses murders one of a psychiatrist’s patients, and now she’s after the prostitute who witnessed it..”

In Dressed to Kill, psychologist Robert Elliot (Michael Caine) is communicating with a patient with identity issues, a patient who admits to possibly being gender confused with violent tendencies.  Meanwhile, a boy’s mother (Angie Dickinson) is killed, and there are reasons to think that the killer is a patient of the doctor.  Loosely connected is a hooker (Nancy Allen, who soon after married the director) who caught a brief glimpse of the murder in a lightning-quick moment going in and out of an elevator.  The rest of the movie is a cat and mouse game of who is chasing who and who saw what and who wants to kill who.  All of it is good, but it also serves as a window dressing to a fabulous scene in which the hooker (Nancy Allen) is used as bait to catch the killer.  There are many things she’ll catch, but I’m not sure if a murderer is one of them.  All in all, it makes for a perfect erotic thriller.

Favorite scene:  When Angie Dickinson stalks, and then is herself stalked, as she walks through and leaves the museum.

Coming soon:  For the Drama