Chestnuts are roasting, hot chocolate is steaming, turkey is basting, pumpkin pie is pumping, and stockings are – um – stocking?  Anyway, all that means only one thing.  It’s Oscar season.  This is the home stretch, when the studios roll out their big-ticket films to keep their stars, films, and sugar plums dancing in the heads of the Academy voters.  Let’s start with one that’s already been released and is doing rather well. 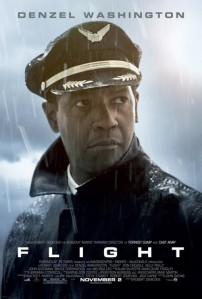 Flight, from Paramount, marks a return of director Oscar-winner Robert Zemeckis to working with humans again instead of animation.  Veteran airline pilot Whip Whitaker (Denzel Washington) miraculously lands a plunging airliner, averting a sure disaster with one hell of an amazing flying maneuver.  He’s a hero, but not for long.  An investigation shows that he was not even just drunk at the time but beyond that.  Still, he saved people.

It’s a sympathy trip for sure, but it’s not a sappy one.  Washington doesn’t go over the top as a functioning abuser.  He instead plays it rather conservative and introspective.  He’s not necessarily in denial of what he’s using, but he is in denial of perspective.  Luckily, it’s not part of the Tom Cruise-formula.  That’s when someone seems to have great talent, has a bad moment, loses all confidence, and then slowly recovers with the help of a beautiful psychologist or assistant like Kelly McGillis Elizabeth Shue, or Nicole Kidman.  Nope.  Instead, the beautiful assistant is played by John Goodman, and how much he’s helping or hurting is another matter.

It opened strong ($25 million) and is still going strong.

Lincoln, from Dreamworks, was originally set to be released the weekend before the 2012 Presidential election, but Steven Spielberg delayed it a week to avoid any possible Republican cries of propaganda.  What they’d have cried about is unclear, but what is clear is that the delay did not help the box office receipts.  The intake was disappointing (an opening weekend just under $1 million) but the reviews are terrific.

Daniel Day-Lewis takes the slaughter axes from Gangs of New York and turns them on breaking the chains of slavery.  Unfortunately, it’s going to take more than axes to break the fighting inside Washington between the politicians both for and against the inhuman bondage that had divided a nation.  The Congress is composed of a bevy of stars, including Tommy Lee Jones, Hal Holbrook, David Strathairn, James Spader, and rising star Joseph Gordon-Levitt.  Many familiar faces in unfamiliar places.  The film mainly focuses on those things in addition to the slavery issue:  1. That Lincoln was a self-educated, axe-swinging, down-to-earth, cabin-raised, deep-hearted guy, and 2. He was just as much a wheeler-dealer as the more city-folk kind of politicians.  He knew how to be a caring man, and he also knew how to play the game, and only someone who had a great grasp of both sides of the coin knew exactly how to spend it in order to put a stamp on the 13th Amendment. 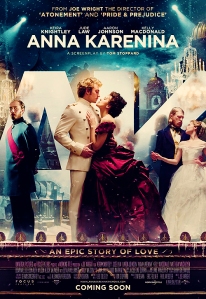 You know that every year there’s a period piece that reaches back to the Victorian, Elizabethan, Renaissance, or another “era” of time.  Anna Karenina is one of two “era” pieces from Working Title Films this year.  Directed by Joe Wright (Pride and Prejudice, Atonement) retells the story of aristocrats with too much time on their hands and too much money in their pockets.  Since they have little else to do except throw outstanding parties that involve a great deal of ballroom dancing and darkly-lit marble halls.  Unless you love reading Leo Tolstoy, you will likely spend more time looking at your watch and smartphone instead of the screen.

Jude Law is Jude Law.  It’s almost impossible not to like him, regardless of what role he’s playing.  However, his role as government minister Karenin requires him to be a boring-as-hell husband who was not giving his wife (Kiera Knightley) the attention she desired, thus “causing” her to seek attention and desire elsewhere.  It’s not an uncommon story, and I’d rather see the same story told through regular, suburban characters with whom I can identify rather than lavishly-costumed sticks in the mud who ride in golden carriages.

Speaking of costumes, it’s likely to win an Oscar for costume design, set design, and musical score, and that will be enough for Wright to be given another chance to not bore me to tears when he directed Knightley in Atonement.  As for Anna Karenina, it’s been filmed about a dozen times, which might beg the question, how good is the story if Hollywood has to keep trying over and over again? 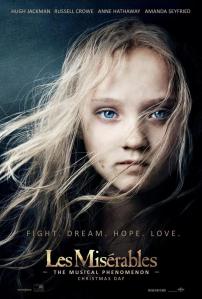 Period piece Two is the multi award-winning musical epic Les Misérables, starring Hugh Jackman, Russell Crowe, and Anne Hathaway and directed by Tom Hooper (The King’s Speech).  Someone at Working Title Films had a lot of faith in Hooper to turn over $61 million to someone who had only directed only two other feature films.  This project actually began in the planning stages back in 1988, almost 25 years ago, with a cavalcade of stars who were on-again off-again in various roles.  Those who didn’t make it on the boat include Lea Michele (Glee), Taylor Swift, Scarlett Johannson, Helena Bonham-Carter (who left but returned), Paul Bettany, Evan Rachel Wood, and more.

Jean Valjean (Jackman) is released from prison but runs away from parole in order to live away from the repressive atmosphere of aristocratic France leading up to the Revolution.  Valjean befriends Fantine, a working woman (Anne Hathaway) who resorts to prostitution to feed and clothe her child.  Valjean protects Fantine from the blight leading up to the revolution as well as the brutal Inspector Javert.  Also appearing is Sacha Baron Cohen, another comedian going the ways of serious acting in the path of Tom Hanks, Jim Carrey, and someone else to be named in the next film to be discussed.

It will gain many artistic awards and should compete for best picture, which automatically means a nomination for best director as well.  It’s a Christmas Day release, which usually raises an eyebrow as being calculated but is never clearly positive or negative. 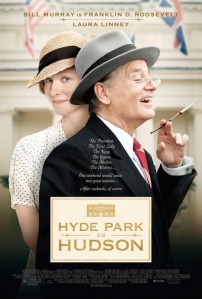 Hyde Park on the Hudson will have one of the most talked-about performances of the year, but will it be greatly liked or disliked?  Bill Murray playing FDR?  Really?  Yes, really.  Back in 1939, before America had joined World War II, the King and Queen of England spent a weekend in upstate New York to convince FDR to bring American forces to Europe.  During the course of that weekend occurs and semi-true, semi-not affair between Roosevelt and his distant cousin Margaret Stuckley (Laura Linney).

Whoever dreamed of making this film should have his or her head examined, but that doesn’t mean it’s a bad film.  Although it was not greatly regarded when originally released in England over a month ago, Daybreak Pictures and director Roger Michel (Notting Hill, Morning Glory) have had a chance to go back and edit for an American audience.  There is a sex scene less than 10 minutes into the British release (no pun intended), and it’s a good bet that won’t change as American’s do like skin, but appealing to a general audience and Academy voters is not necessarily the same thing.

For anyone less interested in what appeals to Oscar voters as opposed to just a good popcorn-munching good time – buy a ticket to Skyfall and you will NOT be disappointed.