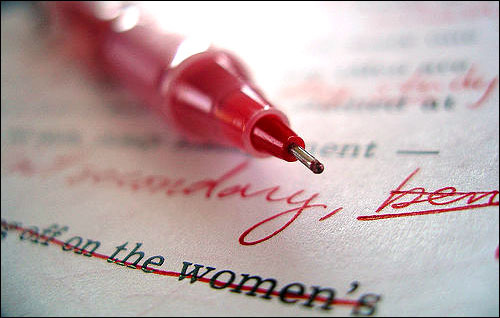 Reblogged partly from my very first post, because you never saw it.

There are a few phrases that people are constantly using that are just plain wrong, and that may or may not be their fault.  However, what really bugs me is when I try to tell them how to fix it, but they are not interested.  Thanks to a suggestion from an astute reader with an affinity for cats, long johns, and crawtators, I should preface this by including that these “rules” are more about formal writing, such as essays and reporting.  When it comes to fiction, poetry, or blog posts, a little flexibility is needed with punctuation for style and nuance.

The reason people get this phrase wrong is because they are mixing up what it is referring to. People are under the false impression that this has to do with a growth chart or line graph, in which a line going “up” is a good thing, and a line going “down” is a bad thing.  However, what it really refers to is something more like riding a bicycle either “uphill” or “downhill.”  On a growth chart, down is bad, but on a bicycle, down is good.  So when we believe that things are progressing smoothly and easily, we are supposed to be saying that “It was all DOWNhill.”  When things are difficult, we should be saying that the conditions were “UPhill.” Please work on that.

Ouch.  Let’s examine this.  When one uses this phrase, the intent is to express that one does NOT care at all.  Complete lack and/or void of caring is taking place.  However, if one says that one “could care less,” then that means that while you greatly do NOT care, there is still room for care beneath that level of not caring.  In other words, “I don’t care, but it’s possible that I could care even less than I already do.”  What one really should be saying is that one “could NOT care less.”  That means that you have such absolute zero care that it is not possible for you to care any less than your current non-caring level.

This one I have only heard in Southern New Jersey.  However, keep in mind that at one point South Jersey almost became a separate state from North Jersey.  I can only speak for all of Bergen County and parts of Hudson County when I say we would have been very pleased.

“Regardless” means that you are totally without regard, meaning you are going to progress without being influenced by certain things or conditions.  For example, “regardless of the rain, I walked to the store.”  It means that I ignored the rain and walked anyway.  But when I say “IRregardless,” then I am saying that I was lacking the condition of not regarding or caring.  It’s like a double negative.  The prefix “ir” means not or without.  So, “irregardless of the rain” means that I was without the condition of NOT being influenced by the rain, which means I was influenced by the rain.

Too many times I hear this from teachers, principals, radio announcers, and just about anyone with a voice.  If I need a pronoun to refer to people, then it must be “who” or “whom.”  The word “that” is used for things or animals.  I constantly hear people say, “I saw a lot of people that were tired.”  No no no.  It should be “people who were tired.”  People are not things or animals.  Well, not all people, so they get the blessing of being a “who” or “whom.”

Many educated people believe this is a real word, but it is not.  The influence is from the word “already.”  See?  The similarities are kicking sand in your face.  Please don’t use the word “alright.”  It’s “all right.”  Two words.  I didn’t do the underscore thing to show the space between the two words because I’m assuming that you can tell there’s a space there.  Otherwise, it would look like this:  “Allright.”  Again, sand in your face.

The English language is all ready being dumbed down by the minute, so please let’s not push it further into the drain.  I realize at this point the contradiction I’m working with because I’m not using capital letters.  There is a difference.  Really.  See, I am using perfectly good and acceptable words, but by not “capping,” (please, no gangsta retorts) I am simply saving the time and energy of reaching for the shift key.  The point is, regardless of the size of the letters, they’re still the same letters making the same words.

Please, writers and speakers, stop saying “either side” when it’s not what you really mean to say.  For example, I will read/see/hear something like this:  “There was a statue of a lion on either side of the door at the entrance to the library.”  What they are trying to tell you is that there is a statue of a lion on the left as well as on the right side of the door.  But when you say “either side,” that means “one side or the other,” but not both.  This is an error made by the best writers in the best publications, and nobody (except me) is innocent.  I have never seen this written correctly, unless it was something that I happened to have written.

To correctly say “There was a lion on both sides,” you have two choices:

If you want to use “either side,” then here is how it would be written correctly.  “Jim,” said the boss, “put the box down on either side of the door.”  That would be telling Jim that he can put it on either the right or the left side. obviously not both.

Many writers use the ellipsis – the three periods – when there is an interrupted thought or dialogue.  For example, I often see something like this:

“Okay, Jim.  I’ll call you back in about…”  Suddenly, an explosion ripped the car apart.”

The dialogue was interrupted by the explosion, and the speaker was cut off after “about.”  This is wrong because that is not the purpose of the ellipsis.  The purpose of the ellipsis is to indicate that there is something more that was removed in order to either save space or because it was not necessary.  You usually use an ellipsis when you are quoting someone else.  For example:

Real quote – “That movie was the best  movie of the year.”

Shortened quote – “…the best movie of the year.”

The full quote sounds awkward because of the repetition of the word “movie,” but it is a good quote.  If I just start from “The best movie of the year,” then I am not accurately using the quote.  By including the ellipsis, I am alerting the reader that there is something more to the quote, but it is not really important.

If you want to interrupt something, you use a hyphen.

“Okay, Jim.  I’ll call you back in about-”  Suddenly, an explosion ripped the car apart.”

The problem with the hyphen is that it is rather small and not as easy to see as the ellipsis.  That sucks.

Also, some people use the ellipsis as if it were an interruption but it is actually a placeholder for something not said, like a suggestion.  The technical term is a “pregnant pause.”  In that case, the ellipsis would be used correctly.  For example:

Do you have any language pet peeves?  Let me know, but I don’t want to hear about how I often don’t capitalize.  That’s a style choice, not an error.