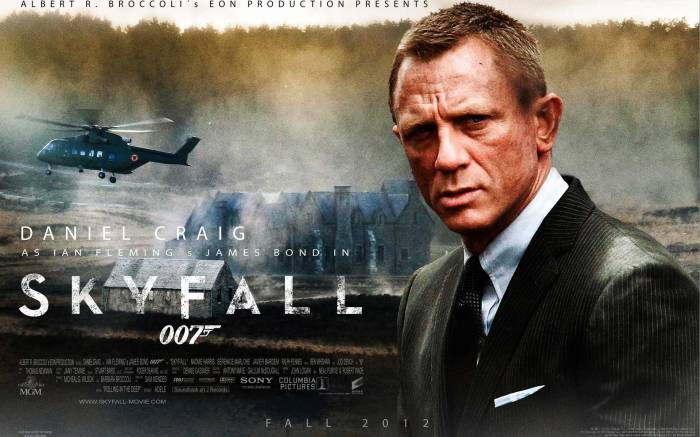 One of the rumors that followed the release of Skyfall was that this would be Daniel Craig’s last Bond film, rumors likely started because Bond is seriously injured in the newest of the 50-year old series.  The injury throws his reflexes off, slightly diminishes his strength, and even leaves a little psychological damage.  However, by the end, I had strong reasons to believe that Craig will be back again.

Skyfall opens with the traditional chase scene, each with its unique stamp of vehicles and/or locations.  This one involves cars, motorcycles, rooftops, a train, and Bond getting shot by friendly fire.  He plummets to his apparent death only to surface in what seems like a tropical location, enjoying anonymity, sex, and drinking games that include scorpions.  However, when yet another cameo by CNN’s Wolf Blitzer announces a terrorist attack at the MI6 headquarters, Bond resurrects himself and submits to thorough physical and mental testing before he is allowed back in the field.

Let’s go back to that opening chase for a moment.  Bond was trying to retrieve a stolen hard drive that contained encrypted information about all MI6 agents, but the bad guy got away with the goods.  Months later, after the information is decoded, agents are murdered and Bond must find out why and by whom.  The man who got away in the opening chase is found and Bond dispatched to get him in a great visual nighttime fight with a giant HD television screen providing the backdrop.  The only negative about the scene is the typical good guy asking the bad guy, “Who are you working for?”  That question has probably never been answered in a film, and it isn’t answered this time, not verbally, but a clue is found that leads to the Far East. 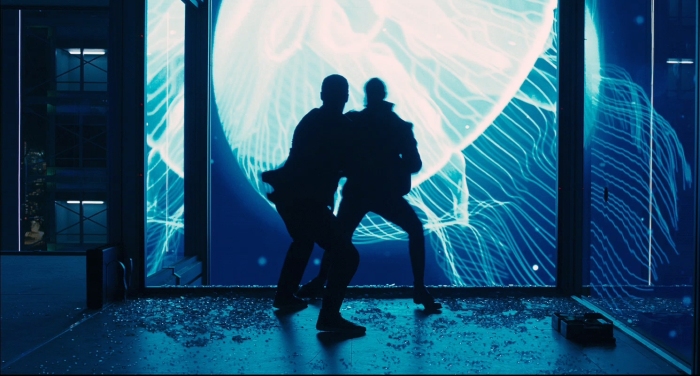 One person leads to another, and one fight leads to another, until Bond finds Silva, the man at the top, played excellently by Javier Bardem (No Country for Old Men).  Silva has the creepiness of Hannibal Lechter but instead of eating brains he wants to eat Bond, literally, in a flamboyant kind of way.  Silva has a connection to Bond, which I shouldn’t reveal, and is a step up from most other villains.  He isn’t just out for money or death and destruction.  It’s not about gold or diamonds.  It’s personal.

The action, fights, and chases are as expected and excellent.  Sam Mendes (American Beauty, Road to Perdition), in his first Bond outing, handles escapes and fights without the silly or amazing coincidences, such as most of the crap in the Mission: Impossible series.  He is known for visual touches like the aforementioned night fight in front of the glowing screen.  Framing his characters with stunning visuals is his trademark.  You’ll notice it in the trailer, such as the arrival in the gondola and Bond standing atop a building overlooking London.  The visuals were fabulous, but not everything was handled with as much directorial care as was necessary.  His first mistake is too much of TCD, Talking Criminal Disorder, in which someone is about to shoot someone, but they spend too much time talking only so that the intended victim will have enough time to figure out an escape while also allowing the criminal to explain something that we need to know for the plot to make sense.

As for Craig, I like the humanity he brings to the Bond films but not “humanity” as in world peace and save the whales.  I mean more humanlike instead of a comic book character.  Bond struggles in Skyfall.  There are moments that intentionally test his physical and emotional strength, and he fails several times.  The title refers to his sprawling childhood estate on the Scottish moors where bad things happened, and he is forced to relive and remember what he has preferred to forget.  I like this a lot more than the Sean Connery (yeah, my opinion) or Roger Moore versions who were too suave and too easily managed their way in and out of trouble.  Judi Dench, stoic as ever, repeats as Bond’s boss, M.  She faces heat from the upper management, in the form of Ralph Fiennes, lately seen wielding a wand as Lord Voldemort in the Harry Potter franchise.  Agents are dying, things seem out of control, in London, and M needs to answer for it.  She answers loudly, then softly, and then it seems that Fiennes is going to be around for a while, which is bittersweet.

A few small things were bugging me during one particular chase.  While Silva was running from Bond, there were three times he failed to do something as simple as closing a door in order to get away from Bond’s pursuit.  However, it wasn’t until long after the film was over when I realized he had “messed up” on purpose.  Something new in the gadgetry were earpieces and microphones worn by Bond, M, and agents so they could communicate during the opening chase and other action scenes.  Yet as cool as that was, it also caused a major hole.

The opening chase ended when Bond fought with the hard drive thief atop a moving train.  A female agent had a chance to shoot the thief, but he and Bond were too close together and fighting.  The agent told M it was not a clear shot, but M told her to “take the shot” because M knew that losing Bond might mean saving dozens of other agents.  The agent took the shot, knocking Bond off the train and into a river, which lead to his disappearance and ability to play dead for a few months.  But when Bond resurfaced, he confronted the agent about having shot him, and he specifically threw back at her the words, “take the shot.”  If Bond knew that, then he was able to hear M and the agent through his earpiece.  And if he could hear through his earpiece, he could also hear the other agent.  That means she could have told him to move so she could shoot the thief with a clear shot.

Little things like that bother me, which is why I have to remind myself to focus on the big picture.  As for Skyfall – it’s a big picture.  See it.  Teacher gives it an A-.

Ps. The good ol’ Aston Martin makes an appearance, as does an updated Miss Moneypenny.

Pps. There’s usually a big deal about each film’s Bond girl.  This film downplays that aspect, and I’m glad because I find the whole concept annoying.