I was warned before watching 12 Years a Slave that it would be graphic and painful to watch.  It was.  I was told Chiwetel Ejiofor was equally worthy as Matthew McConaughey for his Best Actor Oscar in Dallas Buyers Club.  He was.  More than a generation ago, I watched Roots, which to me was all I needed to see to understand all I needed to understand about slavery.  Yeah, but Roots was made for ABC television so suburban families could get a basis in what was not just the centuries of “roots” that belonged African Americans but that also lay beneath centuries of American history.  12 Years a Slave goes well beyond that, and it’s unfortunate how necessary that was.

Solomon Northrup (Ejiofor) was a well-dressed musician in Saratoga, New York, where he occasionally played his violin at parties and other social gatherings.  He strolled the lanes, purchased goods in local shops, tipped his hat, and shook hands with a “Good day to you, sir.”  He lived with his wife and two children in a modest home, as I suppose most were, in the shadows of the Appalachian Mountains, where one finds the most colorful fall days in America.  Speaking of colorful, there’s nothing thus far that necessitates a mention of Solomon’s color, being black.  Not until the deception begins.

On one of these fall strolls, Northrup comes across a friend named Parker who introduces him to two gentlemen in need of musicians for a grand show in Washington, DC.  The promised salary and interesting travel are too much to be ignored, and Northrup agrees.  After an evening of dining and drinking – and drugging – he wakes up in chains.  He is beaten until willing to drop his claim of being a free man from New York.  He is hidden on a boat with several other men, women, and children of similar education and circumstance until he ends up sold to a plantation owner in Louisiana.  Like Kunta Kinte from Roots, he is given a new name – Platt – and is reminded to keep his education to himself if he wants to survive.  He replies, “I don’t want to survive.  I want to live.”  Admirable but temporary.

He spends uncounted years on a few different plantations and with a few different owners, including Mr. Ford (Benedict Cumberbatch) and Mr. Epps (Michael Fassbender), and learns more and more the value of surviving.  There are hangings, whippings, and violence for the sake of violence, as if it is just something to do out of boredom, lust, and pride.  Intentional or not, the most “wrong” seem to spend the most time quoting scripture.  Whether or not what they quote actually is or is not scripture as opposed to a ploy to convince the slaves to accept their place, I cannot say.  What I can say is that either way, those providing the quotes belong in Hell.  For those hearing the quotes, they were already in Hell.

If you were to ask Ejiofor (Children of Men, Salt) how he prepared for the role of Northrup, he should answer, “There is no way to prepare” because there shouldn’t be a way to prepare for that.  12 Years a Slave is an excellent example of extraordinary directing and should have brought a Best Director Oscar in addition to Best Picture and Supporting Actress.  While I also enjoyed Alfonso Cuaron’s work in Gravity, which won Best Director, it encompassed what was close to real time.  Steve McQueen, however, had to envision a character for more than a decade, and over that decade there were subtle but important changes for Northrup.

So while I’m not alone in suggesting Ejiofor was worthy of Best Actor, it’s really the director who had to keep that actor on track by guiding speech and mannerism changes throughout the film.  Few films, if any, are shot in sequence, which is more work for McQueen (Shame, Hunger) to keep Northrup lineally progressing and regressing depending on which scene was being shot.  Keep this in mind the next time you want to congratulate – or criticize – and acting performance.  It is likely the director was much more responsible than the actor, unless the actor is so high on his or her own reputation that he or she completely ignores the director because he or she believes themselves to be God’s gift to film.  Just ask Stephen Spielberg why he vowed never again to work with Julia Roberts after Hook. 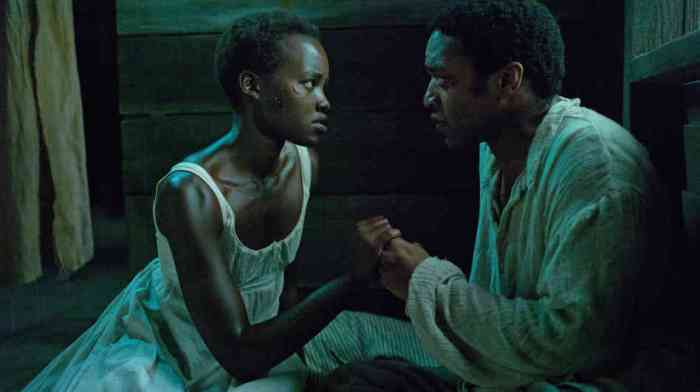 Speaking of Oscars, Lupita Nyong’o, who has twice as many editing and artistic film credits than acting, was at the heart of the most difficult scenes.  As Patsey, she was the prey of Mr. Epps’s animal predation as well as Mrs. Epps’s animal revenge.  In a most ironically tender moment, Patsey asks Platt to bring her to the water and drown her, kill her, so she can escape their hell.  He understandably refuses.  However, a moment comes later when we can see greatly how he was second guessing himself.  Though you can’t possibly know, I have typed and deleted several strong adjectives but still can’t find anything to express how disturbing it was to watch Platt and Patsey during that moment.

You might have noticed Brad Pitt accepting the Oscar for Best Picture.  In addition to producing, he also has a brief part as Samuel Bass, a Canadian carpenter who, while working on one of the plantations, strikes up a conversation with Platt, who of course pleads for Bass to help him escape.  I was surprised, but should not have been, when Bass explained that even just talking to Platt was dangerous for not just Platt but for Bass as well.  I had forgotten how ruthless and lawless America was at that time.  You could have easily been killed, buried, and never heard from again if you crossed paths with the wrong person back then.  Absolute power corrupts absolutely, and fatally.

In most film reviews, I look for at least one thing to criticize so as to balance out a review.  Fortunately or unfortunately, there’s nothing I can recall for which it would be fair to say, “Well, they should have done this, or there was too much of that.”  I got nothing, except a strong recommendation for you to see 12 Years a Slave.

Teacher gives it an A+
https://www.youtube.com/watch?v=z02Ie8wKKRg