Not sure who is prettier

There are bad movies that try to be good, such as Showgirls and Plan 9 from Outer Space. And there are good movies that pose as bad, like The Rocky Horror Picture Show. And there are movies so bad that you actually have a good time watching them because the badness is so much fun. That’s Road House.

A struggling business calls in an expert, Dalton (Patrick Swayze),  for help.  With well-coiffed hair, he arrives in a Mercedes convertible and with a PhD in philosophy from New York University. When he finds the business to be worse than originally thought and calls his old friend Wade (Sam Elliot) for assistance.  I know this sounds like a sequel for Wall Street, doesn’t?  Yeah, but no.  These men are bouncers. 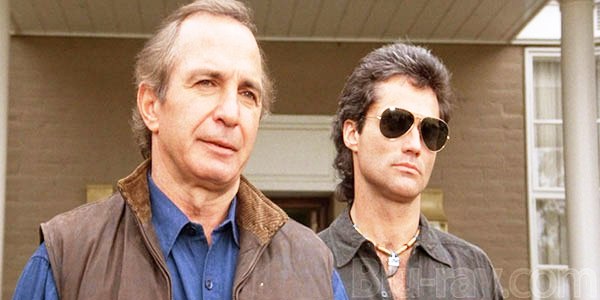 There are mullets a plenty in Road House. A backwoods Missouri bar called the Double Deuce is just trying to make a buck, but tough guy “Boss” (Ben Gazzara) has spent his life killing things, evidence being the personal zoo of dead animals throughout his home. For no apparent reason, Boss must control the Double Deuce and regularly sends his white trash thugs to break windows, mirrors, and chairs until the owner recognizes that “Boss” is boss. Yes, it is just as vague as it seems. 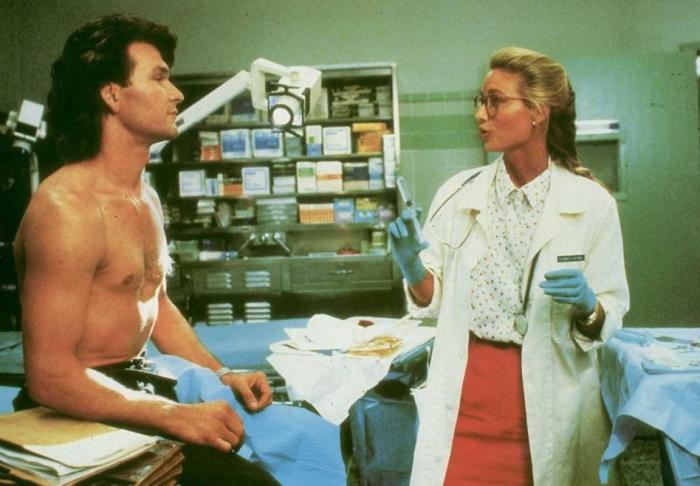 In addition to the Double Deuce, Boss also wants to control “Doc” (Kelly Lynch), the hot local doctor who thinks she is too good for him. Seriously, they call the doctor Doc, probably because of the mini-skirts she wears while stitching up Dalton’s knife wound without anesthesia.  You can’t make this shit up, except they did.  Doc is too good for Boss, but she is not too good for Dalton proves it by letting him take her temperature on the balcony of the home at which he is staying while in town to save the Double Deuce. How fortunate this home is across the lake and in full view of Boss, who gets a full view of the examination on the balcony. This only incites Boss to increase pressure on the Deuce. There are fights, gunshots, bottles thrown, and even a polar bear.

There’s a Philadelphia radio station that rents a city theater at which Road House is shown annually. It’s a combination of audience participation, drinking game, and “who the hell greenlighted this shit?” It’s considered by many to be a “guilty pleasure” kind of movie.  It’s also considered to be something Swayze agreed to do because of all the friggin’ money they tossed his way immediately after Dirty Dancing. Neither writer David Lee Henry nor director Rowdy Harrington had nor has done anything worth mentioning neither before nor after this travesty of celluloid.  More importantly, how did I manage to use “neither…nor” twice in one sentence?

Oh well.  No matter how wrong that might be grammatically, it can’t come close to half as wrong as Road House is cinematically.  Treat yourself to a bad laugh with such lines of dialogue as “Pain don’t hurt,” as said by the guy with the doctorate in philosophy.  When someone says “A polar bear fell on me,” you’re going to wish it had been you.  Yeah, it’s that bad.