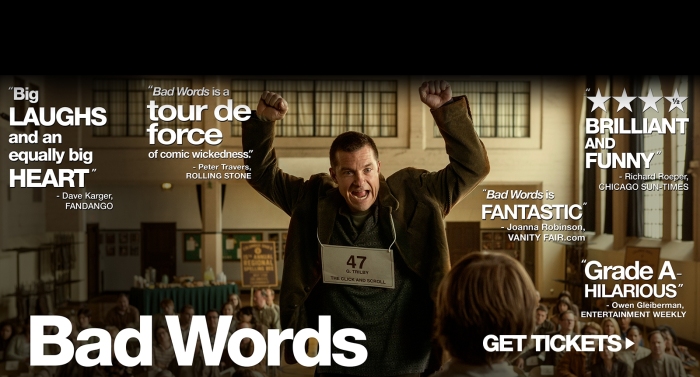 Jason Bateman has had an interesting acting career.  He started in the early 80’s as a regular character on Little House on the Prairie, a very successful tv show from when you youngsters weren’t yet born.  From there, Silver Spoons, and Valerie, a big hit with Valerie Harper.  For a long time he was unfairly compared and considered runner-up to Michael J. Fox, partly because his sister Justine co-starred with Fox on Family Ties and partly because, together, you’d swear they were brothers.

In the middle of 25 successful years in television came his one shot to star in a movie – and what do they offer?  Teen Wolf Too, a stupid sequel to Fox’s hit with Teen Wolf.  It sucked, and he seemed doomed to television.  Then came ten years of Arrested Development, in which he proved an excellent straight man in a great show eventually cancelled for being too intelligent for television.  In Juno he unexpectedly played a really good bad guy, and he began to reclaim the film career from which he had been unfairly removed.

Now comes Bad Words, in which he directs himself as a self-absorbed smart-ass who exploits a loophole to worm his way into a state spelling bee.  At first, it seems his goal is to recapture a lost opportunity from his youth.  Later, however, we realize it is exactly that.  Yeah, I meant it that way.  No, I will not explain.  By the way, am I wrong, or does it seem like all the best films lately are coming from Focus Features?

Guy Trilby (Bateman) probably uses more profanity than non-profanity throughout the film, and a good deal of it is aimed at kids.  It works just as well as it did in Bad Santa, and that’s a good thing.  The profanity is not just his personality but also his way of intimidating the competition, using ruthlessly embarrassing tricks to remove the top contenders.  He is constantly followed by Jenny Widgeon (Kathryn Hahn), a needy reporter who is waiting for a promised interview/explanation.  Instead, it seems her main purpose is to bring out his exposition and occasionally use him for sex.

Vowing to stop his rise through the spelling bee or resign her post is Dr. Deagan (Allison Janney), the mother hen of the tournament who arranges that Guy’s hotel room is actually a broom closet.  Sure he could easily go to another hotel, but he adds that to his pyre that drives him towards the title.  Also in Guy’s path are Dr. Bowman (Philip Baker Hall), the grand poobah of the something educational, and Chaitanya Chopra (Rohan Chand), the best kid I have seen in a movie since the last best kid.

Chaitanya is small enough to lose a fight to Webster but big enough to stand up rude, lewd barrage Guy throws at him to knock him off his game.  The kid is damn cute, but he’s not as innocent as he looks.

The bulk of the film is balanced between Guy’s focus and drive to win this damn spelling bee while keeping everyone, except Chaitanya, at arm’s length and Widgeon at crotch length.  Guy is obviously bitter about something unexplained, but the boy is small enough to crawl beneath his defenses and at least get close enough to join his world.  To Chaitanya, Guy is just a big boy there to have fun, but that assumption is wrong.

Bateman (Horrible Bosses, Identity Thief) barely cracks a smile except when unleashing a lobster in a restroom or doing shots with the pint-sized Chaitanya.  Part of the fun is watching everyone else bounce off his force field that only Chaitanya seems to crack.  His role is fairly predictable, but that doesn’t mean he isn’t the life of the film.  Rohan (Jack and Jill, Lone Survivor) could be the next (insert cute kid actor everyone loves), and I’m looking forward to finding out.  He stands toe-to-toe with Guy and does not flinch, until Guy hits him below the belt.

Janney (The Way, Way Back; Juno) and Hahn (We’re the Millers, Parks and Recreation) have little more to do than give Guy reasons to explain, or not explain, why the hell he’s bullying his way to a spelling bee title.  Hall (Argo, The Truman Show) is one of those character actors you’ve seen a thousand times but whose name you’ll never remember.

As for Bateman’s directorial debut, that only counts for film.  However, back when he was only 19 years old, he directed several television episodes of Valerie.  He takes no big chances other than what can be best called “potty humor.”  He goes far, a few cringes, but good cringes and nothing that would make me question anything except the ending.  I wouldn’t call it predictable, but I wouldn’t say it really solves anything either and that’s why I dropped the grade a little bit.  It’s a case of the journey being more important than the destination, but it’s a Disney-length journey (93 minutes) I might even take again.

I previously mentioned Bad Santa, one of my favorite comedies, and you’ll see some obvious reasons to compare.  Bad Words is not quite as funny, but it is well worth watching when you’re looking for something on Netflix, Redbox, or a certain questionable download site that your anonymous friend showed you.
Teacher gives it a B+.