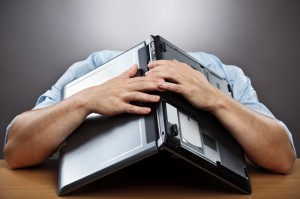 I used to write things, and I used to be pretty good at it. Not great, but good. Maybe even above average. Then a few things happened.

There was this election thing. It didn’t go well. I tried to have patience. I told others to let it play out, see where it goes, but I knew better. The campaign promises were empty, he did some horrible things after his election, but it wasn’t a surprise.

As I said – I used to write. When everything turned upside down, I kept writing, but different writing. Instead of film and book reviews or short stories, my writing was Tweets and Facebook posts asking others to explain how they could possibly support someone who ripped children from families and locked them in cages without a process to reunite them. The replies were, “But Obama built the cages.” Yeah, that’s productive.

A typical exchange was Thomas from my hometown messaging me that the Obamas were a disgrace because they lost their law licenses. Fact checking showed they allowed their licenses to lapse because they didn’t need to spend hundreds on a law license when they were no longer practicing law. When I posted that back to Thomas, crickets. Daily crap like that absorbed my time. Wasted my time. Thomas hated the Obamas and would put his faith in another false reason.

My writing turned into telling family and friends they were wrong, which doesn’t usually go over well. People I had spoken with politely and intelligently were cursing me out. Relatives I had admired since I was a kid blocked me. Hometown friends blocked me. It was confusing, and it was telling. To me, I was doing it because I cared about them and didn’t want them to be fooled. “To me” is one of those things we tell ourselves when something isn’t going well. I was losing some important people, but there was a flip side. As friends were cursing me, people I barely knew were sharing, retweeting, and supporting me. I lost some old friends, but I gained new ones.

Facebook before the election was keeping up with people’s lives. After the election, it was misinformation and fake news whack-a-mole. Every negative right-wing propaganda post I disproved with links and facts was met with lies from the president, but it didn’t matter. They clung to their “alternative facts.” When I had evidence to prove them wrong, they claimed “media bias.” Apparently only my media was biased, not theirs. Somehow, theirs was correct. Mm hmm.

I was still writing and possibly writing even more than before the election, but instead of book and film reviews or short stories, it was me on a soap box. I was cranking out plenty of words, but it wasn’t fun. Wasn’t working either.

Instead of blog posts on WordPress read by thousands of people worldwide, I was stuck in Facebook and Twitter. As of now, I don’t even know how to post on my blog I’ve renewed for years without adding anything since – I just checked – exactly two years and two weeks ago, 2(0)2(0). A book review from January 15, 2019. Ten years ago, I could create and post through my phone. I don’t even remember how to add an image. Wish me luck.

My time on Twitter had gone from dog videos to retweeting hilarious and biting political comments from Bill up near Boston and Heather in Camarillo, CA. It was important, and it was draining. But it was important. I wanted to help people learn something, but I learned that others were no more likely to learn from me than I was to learn from them. I learned we pretty much all have our minds made up, and we’re not going to change unless those we admire say something different. Even then, maybe not. They’ll find someone else to agree with and admire.

It comes down to this: Biden won, Trump lost, but I had already lost four years of my life. I did nothing of value, nothing worthwhile. I wasted time, I drank too much, I cared too much, and I need to move on. I’m finished trying to educate people. And it wasn’t even about educating. It was about thinking for yourself, thinking clearly. You wouldn’t know, but I was in a relationship for many years, more than ten, and I lost that too. Maybe because of the afore-mentioned crap, or maybe it would’ve happened anyway. I don’t know, and I’ll never know. I only know it’s time to move on in more ways than one.

I need to start living again. Writing again. Being again. I need to care about myself. Not you, not that you really cared much about me, which is fine. You’re not obligated to me, nor me to you. If I’m not retweeting you or sharing your posts, this is why.