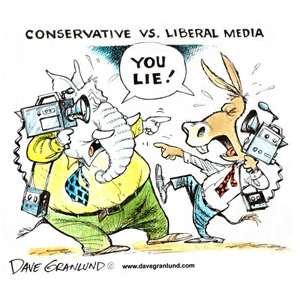 reposted from about 3 years ago, but you’ve never read it.

I’m rather tired of hearing about the “liberal media.” in fact, i don’t agree with the thought, although i don’t disagree either.  let me explain.

are the media on the left, sort of liberal in their attitudes?  I’d have to admit, yes they are. however, are they automatically left, just because they think that liberal is the best way to be?  hell no. let me explain that too.

who pays more attention to world events than anyone else?

who pays more attention to u.s. events than anyone else?

who pays more attention to state and local events than anyone else?

whose job is it to examine pretty much everything that happens in this world, digest it, regurgitate it, and make sense of it in order that the general public can understand and react to it?

yes, the answer to every question is “the media.”

yes, the answer again is “the media.”  and i realize, without being blindly foolish, that there are times when the media has to pick and choose what they believe are the most relevant facts.  i know they can’t present everything and must pick and choose at times.  i also know that they need to get ratings.

so, if the media are the most aware, most informed, and the most credible segment of society, then whose opinions, thoughts, and answers are probably formed with the best composition and understanding of reality?

so, if the media has been determined to be the best informed segment of society, then i guess it makes total sense to accept most of the information from the “liberal” media – because who would know better?  I’m not saying they’re 100% perfect 100% of the time.  i’m just saying that I’m going to accept what they say, but i’ll follow up and wait until I have a reason not to accept what they say.  I’ll still check out the facts to whatever degree i can, but i can at least believe they go forth with good intentions and not a liberal bias.

I’m sure not going to trust the websites that my friend (nameless tim) keeps talking about.  the sites that have definitive proof that Obama was born in Kenya, and definitive proof that trayvon martin had a gun but the liberal media won’t talk about it, and the sites that show how ufo’s are controlling Israel.  okay, i made that last part up, but those other “facts” can be found on the same websites t hat advertise gunracks for pick up trucks and gunmen for hire.  they might have some ted nugent concert tickets for sale too.

46 thoughts on “The Liberal Media?”