Reblogged, because it had been my single-most popular post until I was Freshly Pressed.  From about 3 years ago, and I don’t plan to update it in any way, other than this introduction.  This might also be a hint about where I can currently be found.  Yes, having a sex-change operation.

When my older daughter was 3, she spent a lot of time in costumes because – well – because she was 3.  Although her mother would complain that the child should not go out to the supermarket dressed like The Little Mermaid, I argued, “Why not?  Why must Halloween costumes be restricted to one day?”  Boys from my time had a “what I want to be when I grow up” list that included astronaut, police officer, and baseball or football player.  Today’s boys probably have basketball player and rapper.  Girls will likely always think “princess” until someone brings them into reality.

When I think about princesses, I can’t help but attach “Disney” in front of it.  This may seem strange, but I’ve spent a lot of time thinking about those Disney princesses, but raising two girls and going to Disney pretty much every summer will make that not such a strange idea.  All that thinking led to an evaluation of this princess roster from a man’s point of view.  I supposed using the word “roster” kind of gives it a manly touch already.

As is also a manly thing, I now have to figure the best way to make a princess line-up.  To be a Disney princess you need three things:  1. appear in a Disney movie, 2. female, 3. daughter of a king/tribe/leader and/or married to a prince.  That’s about it.  Some princess lists, like Wikipedia, incorrectly include Mulan, who is rather terrific, but is only covered by 1 and 2.  There has been a recent addition of Tiana from The Princess and the Frog, but I don’t know enough about her so, through no fault of her own, she will not be included in this list.  Thus we are left with, alphabetically, the following:

Now I need a way to order them.  An easy way would be prettiest to ugliest, but that’s not fair because they’re all pretty and that’s kind of a shallow (but manly) way to list them.  Instead, I will simply list them how I like them, also rather manly, from least to most.  Of course I will explain why, otherwise this didn’t need to be more than pretty much one sentence long. 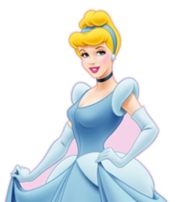 The worst of the princesses, yet considered by many to be the best, Cinderella has two very big strikes against her.  Within minutes of meeting the prince at the ball, she’s already in love.  There is nothing wrong with the idea of wanting to be a princess and wanting to meet any decent guy, even if not a prince.  However, she is all over him a little too quickly.  You could argue that she likely has never been on a date, and that would make her susceptible to wanting to jump on anything with the right chromosomes.  More importantly, or more “wrong,” is that she allows herself to be mistreated by her stepmother and stepsisters.  She’s a slave in her own home.  After her mother dies, her father marries a pretty cruel woman.  Then he dies, and the stepmother takes over.  Cinderella could have done a better job of standing up for herself.  Instead, she willingly went along with the servant program.  She deserves no respect. 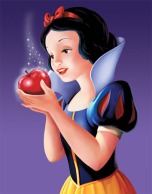 It was not easy to put Snow White above Cinderella, but there is a key difference among the negative similarities.  They are both stupid.  They both fall for the first man who shows them any attention, which may have been typical for their time period because it wasn’t every day that a good man rode up on a horse.  Although Snow White was dumber, I have to give her a break because she was raised within the walls of a castle and never had any sense of the outside world.  If the Wicked Queen told her the sky was green, then it was.  So even though the Dwarves told her not to talk to strangers, it is hard to blame her when an old woman tells her to bite the magic apple and her dreams will come true.  She was pretty dumb, but not the dumbest, so not the last.

Like it or not, The Little Mermaid should really be called The Little Brat.  Regardless of how inflexible and unreasonable her father, King Triton, might have been, she was going a little too far by declaring that she’s sixteen and will do what she wants.  She, like the previous two princesses, just got a bit too gaga when she saw a cute boy.  She’s cute and smart, and I love that hair, but her attitude needs a big adjustment.  In the end her father makes her human so she can literally run off with Prince Eric, and that was probably the best thing her father could have done for both himself and the rest of the ocean.

In Sleeping Beauty, the resident princess is barely in the story.  She doesn’t really do anything.  She spends most of the movie hiding out in the forest home of Flora, Fauna, and Merriweather, the three fairies who are protecting her from the evil Maleficent.  The only thing of any importance to say about Princess Aurora is that she is easily the prettiest of them all.  other than that, she is irrelevant.

Props go to the little big girl.  Although she is only sixteen, like Ariel, she put the fishtail to shame.  She also has a bit of a defiant streak in her Arabian blood, but she is purely justified when she stands up against Daddy Sultan.  While the law of her land says she marry at 16, she tells them all where they can go.  When Aladdin shows up slinging gold pieces from atop an elephant and an entire circus in tow, she wants nothing to do with him.  This stark contrast is why she makes both Cinderella and Snow white look like classic tarts.  The only reason she starts to fall for the faux prince Aladdin is because he lies to her and pretends to be just a regular guy, while pretending to be a prince, while really being a homeless kid, which is not exactly what she wants, which is still better than an arrogant prince, or a guy who pretends to be one.  Got it?  Good.  She wants a guy of substance because she is a girl of the same. 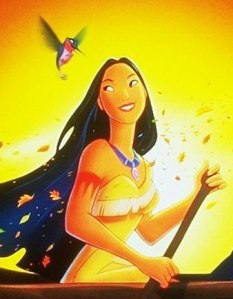 She kicks ass.  She can run, swim, dive, fight, sing.  Well, they all sing, but somebody else usually supplies the voice.  Anyway, what makes her stand up above the others is that she gets involved when she would have been justified in doing nothing.  When the white settlers arrive, they bring trouble for her tribe.  She could have just stayed quiet and let the men handle it, but instead she took action.  I’m not saying she did the right thing or that her actions turned out well.  Actually, she caused the death of a tribesman, but she still deserves credit for doing something.  And she’s got a fabulous body.

We have a winner!  Belle is everything.  She, like the others, is a beauty, as her name suggests.  More – I think – importantly, she’s got a heck of a brain.  Beauty and the Beast proves that she has no interest in surface appearances.  When her father disappears, she gets on a horse and rides out to find him.  When she realizes he is locked in a ghastly castle, she goes in after him.  When a monster tries to kick her out, she willingly trades her life for her father’s release.  She outsmarts and rejects the town heartthrob, which completely devastates the three bimbos so ready to throw themselves at his big feet.  You know what they say about big feet.  Big smell.  There is nothing about Belle that you can criticize.  Although, I’m not really sure how she understood the horse.  All in all, she’s the closest there is to a “real” woman.  Some heels wouldn’t hurt though.

48 thoughts on “The Princesses”