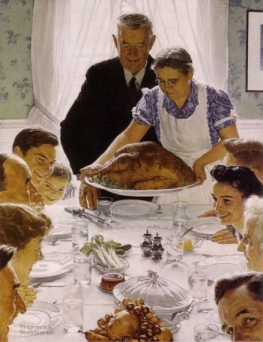 Maybe you saw this post two years ago.  Maybe not.

Thanksgiving is my favorite holiday because it has the spirit of Christmas but without either the pressure of giving gifts or the concerns about religion.  By concerns, I mean worrying about whether you should say “Merry Christmas” or “Happy Holidays” or “Bring on the Winter Solstice!”  You also don’t have to worry about how to spell Channukah/Hannuka/Hannukah/That Jewish Thing.

With Thanksgiving come three things – weight gain, football, and the start of Christmas music on the radio, 24-hour Christmas songs until a day or two after the 25th.  Also happening on Thanksgiving, and happening only once a year as far as I know is the traditional playing of “Alice’s Restaurant” by Arlo Guthrie – found at the end of this post.  It’s a wacky yet poignant anti-war song that I love, but I don’t want to hear it more than once a year so it’s all good, but let’s go back to the Christmas music.

Before anyone complains, I prefer not to hear any lectures about the injustice that “we” inflicted upon the Native Americans after they so nicely kept us from starving.  Of course it’s true and appalling, but I don’t want to hear about it. Not this week.  I also don’t want to hear about any insensitivity regarding Hanukkah, Kwanzaa, the Winter Solstice, or any other cultural significance.  I’m not insensitive to those events, but I don’t celebrate them either.  I celebrate Christmas, so that’s what I’m writing about.  To be more specific, I’m writing about the songs, and to be even more specific, I’m writing about my favorite Christmas songs.  Just as I did with the great movies, I’m breaking the songs down by category, but luckily there is a small enough group that it’ll fit into one post.  Categories:  rock, country, classic, soul, and fringe.  Before you ask, “fringe” is something that is sort of rock but on a more alternative level.  I’ll explain when I get there.  Also, about the videos, they’re not official but just something to see while the song is playing.

Rock – “Santa Claus is Coming to Town” by Bruce Springsteen.

You can argue all you want, but there’s no better rock n roll Christmas song.  He takes a holiday classic, gives it a beer, and turns it sideways.  Also, he made sure there were sleigh bells.  Usually, I don’t want to hear a Christmas song without sleigh bells.  There’s more than one version of this song, but the best is the first one released, recorded at CW Post College in New York in 1975.  It was very well recorded with one fractional moment of feedback early in, and then it just kicks ass from there.  The sax rips when necessary and Bruce screams when necessary, but I wouldn’t call it screaming.  It was early enough in his career that he could belt and hold a note and an actual musical note at that instead of something that sounds like car tires on gravel.  This video is not the best version, not the one played on the radio, but it’s still a good one.

By classic, I mean the vocalist and not the song.  Tony Bennett has a voice that just makes me smile, like tea with honey in front of a fireplace.  I smile because I can hear the smile on his face when he sings.  It’s not impossible that I chose this particular song because of the movie When Harry Met Sally, when Meg Ryan is struggling to bring home a Christmas tree and stumbles in the snow.  However, I grew up with Bing Crosby, Elvis, and other artists on the record player while decorating the tree and trying to find the hidden presents, so Tony was in there for me many years before Harry and Sally.  What finishes the song for me is the excellent use of flutes or clarinets, horns, and strings to really highlight his voice.

I’m going to let the category “Inspirational” speak for itself.

Soul – “Someday at Christmas” by the Jackson 5

I had to have at least one song that was more about the Christmas spirit, peace, and good will instead of Santa and snow, so this song certainly fits the “soul” category in both style of music as well as meaning.  It could be argued that it’s more like pop music than soul, but I don’t care because nobody is going to successfully argue that the Jackson 5 did not have soul.  It’s not a black thing, it’s a soul thing.  It starts with sleigh bells (Yes!) chiming out a little “White Christmas” before a drum beat turns it into a heartfelt plea for peace, but you can dance to it.

Yes, yes, John Cougar Mellencamp Ayers Allen Rashad is often thought of as rock, but he’s got fiddles and harmonicas mixed in his Indiana/Farm Aid roots.  You can take the boy out of the country, but you can’t take the country out of the boy.  His version of this song is nothing but country, and it’s a foot-stomping good time.  It starts with a slow guitar, then kicks from first right into fourth gear with touches of variation from the regular tune, jumping in a little early and a little late a couple of times just to keep you from getting too comfortable.  Like Bruce’s song, this was recorded early enough in his career not to protect you from his audio voice but from his attitude voice.  Today, with the anger he’s got stored up, I doubt he could record this same song.  He’s been through too many love and career roller coasters, so we’re lucky he taped this while he was able.  Another reason to classify this as country is that I don’t listen to country music, I love this song, and it was the only way I could work it in.

Fringe – “Little Drummer Boy” by Joan Jett and the Blackhearts

Want raw?  Joan Jett.  Want attitude?  Joan Jett.  Want someone who stays on key 24/7?  Okay, not Joan Jett, but she makes up for it with power.  A very traditional-sounding snare drum keeps pace throughout a very non-traditional version of what’s all about the Nativity, but the barn will be shaking during the bitching guitar riffs.  It’s a song rarely heard on the radio by those month-long Christmas stations, so you’re better off finding it on iTunes or something like that.  What really dots the “i” is when she replaces “the ox and lamb kept time” with “the ass and lamb kept time,” and she throws in a little Yiddish too.  And when she sings “rum pa pum pum,” any Spanish teacher would be jealous of how she can roll her R’s.  If you’re driving while it’s playing, pay attention to your speedometer because it’ll start climbing without you even realizing it.

I guess it’s my Italian heritage that makes this song so much fun.  The references to the “hills of Italy” reach home because my family extends from a mountain village in southern Italy where to this day there are only 50 families and three have my same last name.  Then extend that to the fact that Lou Monte, who recorded the song, is from my hometown.  Bada-bing!

It’s a catchy tune that pops into my head in the middle of summer if I’m not careful.  It starts – like a couple of others – with sleigh bells and recounts how Santa was helped by a little Italian donkey because the reindeer couldn’t handle the terrain.  Of course, if the reindeer fly, then the terrain is a non-issue.  But shut up.  It’s a fun song with a brief scattering of some Italian vocabulary that you’d here – or I would hear – at pretty much any family wedding, birthday party, or holiday gathering.

2 thoughts on “Your Holiday Hit Parade”