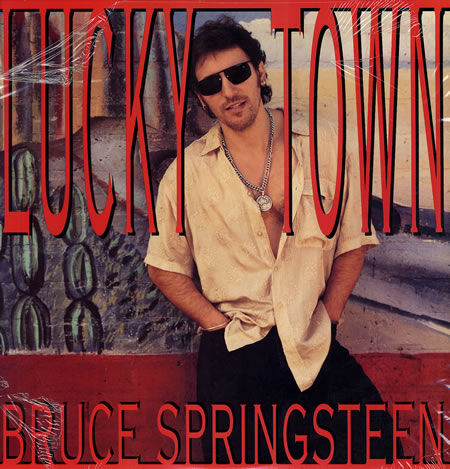 There are many definitions of poetry.  Some better than others and some worthless, but here’s my favorite.  “Poetry is saying as much as possible with as few words as possible.”  Easily demonstrating that definition is much of the work of Bruce Springsteen.  A terrific example is his song “Lucky Town,” in which a man lost sight of his family’s value after being blinded by the lights of the casinos.

With just the first eight words – house got too crowded, clothes got too tight – Springsteen has already drawn a character so overwhelmed and annoyed by this wife and kids that he’s packed on some pounds through sloth, gluttony, or both.  It continues with – don’t know just where I’m going tonight.  Seven more words paint the man, now caught between the world he’s running away from and the mirage he’s chasing.  He either doesn’t want to or can’t go back to his family, but he also doesn’t have a plan of what to do next.  Later on – the joke’s coming up through the soles of my feet.  His luck, which now seems laughable, is as worthless as his worn out shoes.  Still later – been a long time walking on fortune’s cane, well tonight I’m stepping lightly and I’m feeling no pain.  He’s chasing that one lucky pull on a slot machine, or that one big poker hand, but he hasn’t caught it.  His confidence is low, so he’s no longer walking boldly.  And he’s resorted to drinking to cope with the fortune that he believes is just around the corner but somehow eluding him.  It ends – When it comes to luck, you make your own.  Tonight I got dirt on my hands but I’m building me a new home.  He now accepts that the results  you get are not from luck but from the work that you put into something.  He’s given up on that lucky hand he’s been waiting for.  He’s getting his hands dirty with real work, choosing now to go after an honest living instead of hoping for the get-rich-quick scheme that is gambling.

You can find other songs with more details about gambling.  What you won’t find are songs that give you so much about the gambler, what he’s risked, and what he’s lost.