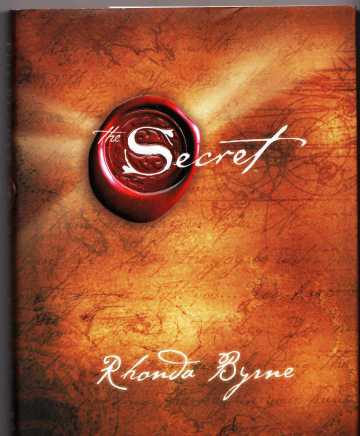 Part 13 of a 6-part series of testing what I think might be stupid self-help books:

Listen up, idiots.  You’ve been going about everything the wrong way, and I – with the help of Rhonda Byrne and her book The Secret – will now help you have everything you’ve ever wanted or dreamed up, no limits, no matter what.  There are three simple steps:

I’m not sure what I’ve been reading for the past five and a half years, but clearly it was all the wrong books because this one book is the key to just plain everything, without exception.  Health?  Money?  Happiness?  World issues?  Everything is solved through The Secret.  You want a new car?  Bing.  You want a million bucks?  Done.  With four million copies sold of a book that has “swept the world,” Ms. Byrne can’t possibly be wrong.  Shakespeare, Lincoln, Plato, Edison, Henry Ford, and a host of others all knew about “The Secret,” and that’s why they were all so successful.  It was depicted in cave drawings and can be found in the music of Beethoven, so it cannot be denied that this is The Secret to having everything.  How Ms. Byrne proves those claims is apparently another secret.

Of all the laws of the universe, the strongest and most pure is the “law of attraction.”  Hey, stop it.  She’s serious.  Anyway, according to Byrne, if you don’t have what you want, it’s your own fault.  You’re thinking bad thoughts, and that’s all there is too it.  The law of attraction says that we attract what we think about.  If we’re thinking about negatives, we’re going to attract negatives.  If you want good things to happen, then you must think good thoughts and create good feelings within yourself because “like attracts like.”  I think that’s also how you can fly, but I’ll double check with J.M. Barrie.

For example, a quote in the book is a story of a man who was gay and worried all day that his co-workers would harass and make fun of him.  When all of those things happened, that is what happened, and it was his own fault.  Once he learned to think positively, to think that his co-workers would treat him nicely, the bad ones either transferred or quit, and the new ones hired were nice people.  Other cases refer to people who were greatly in debt and could not get out of it.  Their problem was that they were focusing on “not having debt.”  The catch there is the “not,” because The Secret doesn’t recognize negatives.  Examples from the book explain that if you say you “don’t want debt,” you’re going to get debt.  If you “don’t want a bad haircut,” you’re going to get a bad haircut.  If you “don’t want your shoes to hurt,” they’re going to hurt.  That doesn’t seem to coincide with a later case in the book in which a boy went to Disneyworld with his family and experience long lines and waits on their first day in the park.  That night he kept telling himself that he “doesn’t want to wait in long lines tomorrow.”  Not sure about Ms. Byrne, but I see a negative in there.  Regardless of the contradiction, the next day they were miraculously greeted by a Disney representative who gave them VIP passes to move to the front of every line all day.  Hmmm. 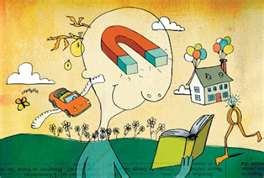 Perhaps I’m simplifying it too much.  Let me be more specific, according to the text.  See, everything in the universe is energy.  All energy emits a frequency signal.  All you have to do is think positively and you’ll change your frequency.  Then your frequency will match the good things that you want.  Once that’s done, the universe has “no choice” but to bring you those positive things that you’re not attracting.  Think positively about money, and in about 30 days or less there will be checks in your mailbox.  Literally, it’s that simple, according to the book.  She also says that once you’ve spent enough time believing that you actually have what you want, you really won’t need it because you’ll be happy anyway, so it’s a win-win situation whether you get what you want or not.  You want to know how the universe does it?  Byrne says it’s not your concern, so don’t worry about it.  One of her experts on The Secret, Dr. Ben Johnson, puts it like this:

What about when bad things happen on a mass scale, like the tsunami that hit Sri Lanka in 2004?  Byrne says that all those people were thinking negative thoughts, and their collective negativity attracted that tragedy to themselves.  Sure there were some innocent, positive people there, but that just goes to show you another part of The Secret:  staying away from negative people.

If you’re around people who talk about their problems, their problems are going to come to you.  If someone tells you about their illness or disease, you’d better get away, change the subject, or prepare for that same disease.  Guaranteed.  Likewise, if you have a disease, don’t talk about it.  You must pretend you don’t have it because your own foolish negative thoughts are what gave it to you in the first place.  Change your mind, change your situation.  Yeah, it’s that simple.

I’d have to believe that Byrne’s research must have included web searches of articles of famous people who may have uttered or written the words “the secret.”  Too many times she claims apparent testimony in such a way that it seems Henry Ford, Albert Einstein, and others are endorsing The Secret.  The best was from Ralph Waldo Emerson, who said, “The secret is the answer to all that was, all that is, and all that ever will be.”  My search on that quote, however, shows that he was talking about the secret to his faith in God, not exactly the secret to getting checks in your mailbox.

I decided to put The Secret to a test.  I spent a week thinking positive thoughts to bring me a 21-year old Asian willing to be my “personal assistant.”  I set an hourly alarm in my cell phone to make sure I would think about the positives of this mutual arrangement.  After two weeks, The Secret did not deliver – but I realized my mistake.  I didn’t specify gender.