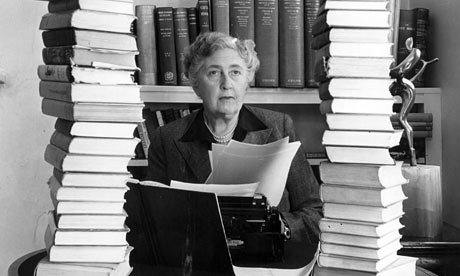 You probably write, maybe not a lot but to some degree. If you write for fun and aren’t seeking to get published, you really don’t need to read this. However, if you have already reached a point or there’s a chance that you’ll eventually reach a point of querying agents or publishers, then this is for you. It’s important to remember that for most authors, writing isn’t just Oooh, look, I created a world with dragons and elves and magic! It’s also about working.

In the past, stressing “past,” I’ve been a “quitter” – one of those writers who is easily defeated.  The first time I queried a book, I quit after about five rejections. Most writers know that five is barely a whisper, but many quitters like me are ready to shelve the whole thing. I’ve been one of those writers ready to start the next first draft even when only one hand is needed to count the “thanks, but no thanks” replies. Now I’m changing that.

We’ve all heard about how many agents and publishers rejected Dr. Seuss, J. R. R. Tolkien, and J. K. Rowling, and many other well-known authors, so I’m not telling you anything new there. I didn’t give it the credence it deserved until I was watching and interview with actor Aiden Quinn on CNN recently. He, like others who were interviewed, was asked if he had advice for those starting out in acting. He wanted younger actors to know that 90% of acting jobs don’t go to the better actors. Jobs go to those who don’t quit. Too many people quit, and that allows less talented people to get more acting jobs. That also applies to writing. Each time a writer quits pitching, it allows someone else’s manuscript to get into the hands of an agent or publisher.

I was recently speaking with college graduates who, in my opinion, weren’t working hard enough at job hunting. They ignore my suggestion to tailor each cover letter to the specific employer or make any subtle changes to show that they had done any kind of research about the companies or their competitors.

“Well,” I began, “jobs are given to those people who will do that much work. No matter how talented you might be, if you’re not willing to do the work, then you’re not worthy of getting the job.”

Don’t call me a hypocrite because I have a right to disapprove. Having already admitted to being a quitter, I know what it’s like to avoid that much work when it comes to the business of writing. That’s changed now.

Obviously, the most common query reply is “Thanks, but no thanks,” but there’s another reply you have to be ready for, and I don’t mean emotionally or psychologically ready.  I mean PDF-ready. If you don’t know what PDF-ready means, then you need to pay attention.

When agents and publishers aren’t rejecting you, they’re asking you for samples. That means something like your first chapter, first three chapters, first 1,000 or 5,000 words, or a synopsis. If you’ve checked agents’ and publishers’ submission guidelines, you might know that some ask for samples submitted with the query letter. If you don’t have these ready before you send out queries, then you’re not ready for the business of writing.

After you’ve (hopefully) revised, revised, line edited, and revised, you’ve got work to do before querying. Take a look at this screenshot from my computer, and you’ll see 20 different samples for Woodbury Avenue, my recently finished novel that I began about 3 1/2 years ago. 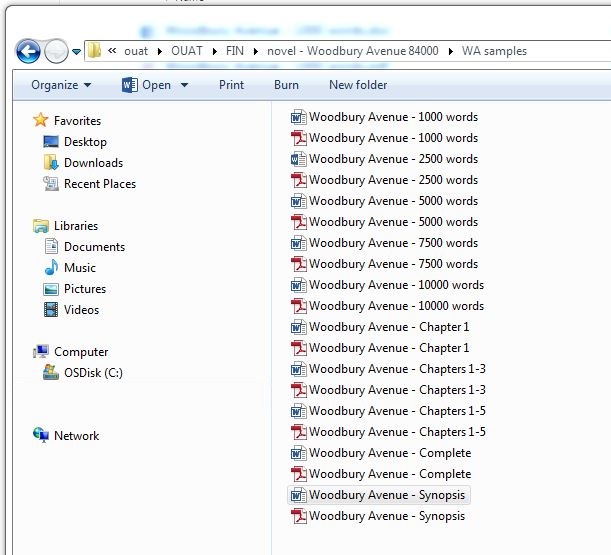 Those are the likely samples that an agent or publisher may want to see.  The file names are self-explanatory. Make those files now, and make a PDF version too. The benefits of a PDF is it’s easily viewed without MSWord and it can’t be edited or changed. You don’t have to worry about formatting changes because it’s embedded much like a picture file. It’s also email-friendly, meaning the recipient doesn’t have to worry about opening a Word file that might have something attached to infect one’s computer.  Yes, it happens with Word docs, but not with PDFs.

If an agent asks today for your first three chapters, then you need to be ready to send those chapters today. Consider the chance that an agent asks three people today for their first three chapters. We can assume the once received first will be read first. If that first one is well liked, it’s possible it’ll take a while before they get around to reading the other two that haven’t arrived yet. I don’t like clichés like “The early bird gets the worm,” but clichés exist for a reason. You must want to be that reason.

Here’s the complaint I’ve gotten about having all these samples ready: But if I revise further and make any changes, I now have to go back and recreate all those documents. Why can’t I just make them as I need them from the one complete manuscript file?

Answer 1: Not only do you need to keep all these files ready, you need to have them stored on Google Docs or Microsoft OneDrive, where mine are. This way, if I’m away from my computer and get an email in which an agent asks for my first three chapters, I can reply and attach the sample right from my phone. I don’t need to wait until I get home, whenever that might be.

Answer 2: I did this today after changing one simple paragraph break. It took less than ten minutes to make ten new samples and upload them to OneDrive.

By having these samples ready for immediate reply, you also make yourself appear more professional. Don’t worry about appearing too anxious by replying too quickly. Everybody knows that most people, especially writers, are connected to their devices most of the day. If you reply with your sample quickly enough, the agent or publisher will be able to start reading while your query is still fresh in their mind, maybe even before they get to more queries. I know there are many agents who hand off the sample chapters to their assistants to read, but that doesn’t matter. Faster is better. Or, to borrow another cliché, “Strike while the iron is hot.”

Now that I’ve spent this time providing you with more advice on the business of writing, I’m thinking some of you still won’t feel like doing all this work. If not, that’s okay. Maybe you really aren’t ready. Or maybe you just don’t care enough. That’s fine because you’re making it easier for me to get published instead of you.