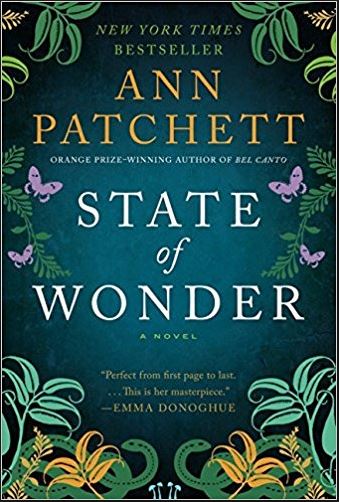 There’s nothing about State of Wonder that would have spurred me to read it other than my daughter’s answer when I asked for a good book to read. I wouldn’t have wondered about a doctor going into a jungle to learn how her colleague died while following up on drug research in the Amazon. I wouldn’t have cared about her past failures and inabilities that posed extra challenges beyond just going deep into the jungle. But if you ask me, “Read any good books lately?” I have one for you.

State of Wonder begins with Dr. Marina Singh processing the news of the death of Dr. Anders Eckman. He was checking on the progress of a revolutionary fertility drug in a remote area of the Amazon. Mr. Fox is the head of Vogel, the pharmaceutical company funding a project led by Dr. Annick Swenson who, at the age of 73, prefers to work at her own pace without being slowed by outside interruption or supervision. She is so focused on her work that she reported Dr. Eckman’s death with a postcard that seemed more like an ingredients label than the passing of a friend. To make it worse, Marina, accompanied by the mostly silent Mr. Fox, must inform Dr. Eckman’s wife of his death.

As is expected, Mrs. Eckman is crushed. As is not expected, the grieving widow convinces Marina that Vogel owes her more than just bad news. She wants Marina to travel to the Amazon to learn more and retrieve any of her husband’s possessions that may still be there. It isn’t until Marina suffers through a dinner with an emotionally absent Fox, with whom she’s had more than just a working relationship, that she chooses to make the trip. She’s motivated by a combination of Mrs. Eckman’s anguish and her recognition that her own life and career are not so compelling and exciting as to deter her from literally risking death. Marina goes home and starts packing.

“Fish out of water” is a good plot simplification as Marina has no survival skills for dealing with the jungle. However, her good nature and positive intentions are more than enough for dealing with people such as the Bovenders, a couple that lives in Dr. Swenson’s condo, fields her mail, and helps her travel back and forth from the secluded jungle to the city of Manaus, Brazil, for restocking supplies and other needs. Once Marina eventually connects with Swenson, we realize there’s more to this story than just finding out how and why Dr. Eckman died.

It’s likely that every story has at least one moment that could be viewed as a convenience or contrivance that facilitates the plot. The only failure in State of Wonder is having several conveniences. It’s apparent from Marina’s arrival in Brazil that she would have accomplished absolutely nothing without Milton, a taxi driver who seems to have access to anyone and anything she needs. He gets her through the locked doors of a local store late at night when she needs supplies. He steers her to the Bovenders who then connect her with the reclusive and elusive Dr. Swenson, the subject of another convenience.

A blurb for State of Wonder refers to Marina as entering the jungle to find answers to “questions about her friend’s death, her company’s future, and her own past.” Before working on pharmaceuticals, Marina was a med student pursuing obstetrics. One of her professors was the same Dr. Swenson for whom she now searches. She had a very unfortunate event in her past, an event that involved Dr. Swenson and feels like another contrivance to add a little extra drama. Throw in the suggestion that she also has a romantic history with the deceased Dr. Eckman, and the web of connections feel artificially thick.

It could be argued that some of State of Wonder is predictable, but that doesn’t make it bad. Marina’s triumphs are telegraphed and welcomed at the same time. it’s expected that a former obstetrics student would eventually have to deliver a baby, kind of like the Tom Cruise movie formula. However, the complications involved are not expected yet still enjoyable.

Actually, nearly everything Marina does is enjoyable, even when it isn’t for her. She allows us to explore the Amazon vicariously through her, and she’s so likable there’s no way anything bad is going to happen. I say “nearly everything” because there’s a moment at the very end of the story when she has a choice to make. What she chooses certainly seems like the right thing to do, but it’s not exactly enjoyable. Not for us. What is for us is a very good but not great book in State of Wonder.